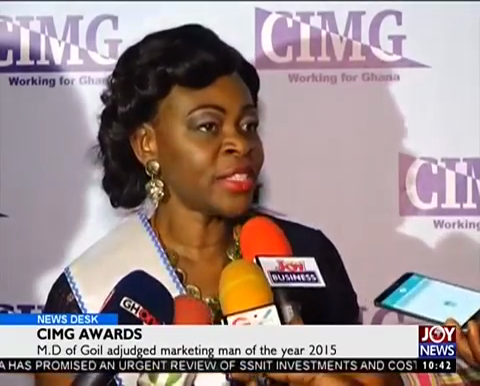 The Managing Director of Unilever Ghana Limited was on Sunday adjudged the Marketing Woman of the Year 2015 at the 27th National Marketing Performance Awards.

Elizabeth Arkutu was celebrated for her extraordinary leadership in 2015 which did not only solidify the Unilever brand in the country but also helped the company meet the needs of its numerous customers.

A citation read in her honour at the ceremony organised by the Chartered Institute of Marketing, Ghana (CIMG), extolled Mrs Arkutu's peerless vision for the future, heightened human relations and her humility when relating with her colleagues no matter their position in the company.

She was also eulogised for helping in the expansion of Unilever Ghana's operations that saw dozens of Ghanaians employed, halving their dependence on relatives.

Speaking to Joy Business on the sidelines of the event, Mrs Arkutu said what sailed her to the top was the way she collaborated with her colleagues to navigate Unilever Ghana during this "time of economic challenges and difficulties" which saw the performance of the company peak between 2014 and 2015.

"We put in place good strategies, did some great innovations, activations and cost savings and we were able to correct our profit and loss (PNL)," she said.

Surrounded by her children and colleagues, she thanked her father for the extraordinary way he raised her. She also thanked her colleagues at Unilever for their cooperation.

She promised to "continue to grow" the Unilever brand in Ghana, prosper the Ghanaian economy and contribute to the local industry.

The awards held at the State Banquet Hall was anchored on the theme “Democracy and National Cohesion; Marketing a new political paradigm.”

National President of CIMG, Kojo Mattah intimated the presentation of the awards was an attempt to encourage professionals and business leaders to aspire for excellence in whatever they do.

He said the organisation's mantra "Working for Ghana" should underpin every decision and action businesses take daily to meet their objectives.

Mr Mattah also used the opportunity to call for tolerance and peace before, during and after the upcoming December polls.

“It is a fact that none of us here can successfully carry out our profession or business in an atmosphere of chaos, except if one was a gun-runner," he told the audience.

The CIMG programme saw 42 awards handed to organisations and individuals for excellence and extraordinary work done in the year.