Update: Soldier who committed suicide had child outside wedlock - MyJoyOnline.com

Update: Soldier who committed suicide had child outside wedlock 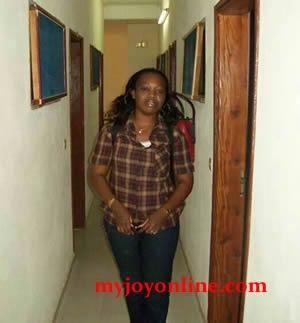 The misunderstanding that resulted in the alleged murder of Corporal Antoinette Agbagba of the Airforce by her soldier husband has been revealed.

It started when the late wife noticed the husband Corporal Fred Nasrame had another child without her knowledge.

Corporal Fred Nasrame of the Armed Forces Pay Office allegedly shot his wife, Corporal Antoinette Agbagba of the Airforce after she decided to call off the marriage.

The couple were set to mark their two years anniversary this March.

Before they got married, the husband informed the wife Antoinette that he had a son.

Antoinette accepted the child, a boy, and took him as her own son.

She decided to call off the marriage since she could no longer trust her husband.

Family members and friends occasionally tried to resolve their differences but to no avail.

On that fateful Wednesday in the evening, it was alleged that the deceased Antoinette had gone to the barracks at Michel camp to pick some of her belongings at the residence.

It was there that she met her untimely death.

Myjoyonline can confirm the late husband used a locally manufactured pistol and shot the wife on the chest at a close range killing her instantly.

He then pointed the gun to his neck and shot himself.

The military got to know about the death after both soldiers failed to report to work.

Later this morning Saturday at about 8:45am,the General Officer Commanding the Southern Command Brig Adeti Sampson visited the residence where both soldiers died.

He was accompanied by the Acting Commanding Officer of the 1BN Michel Camp Lt Col Owusu.