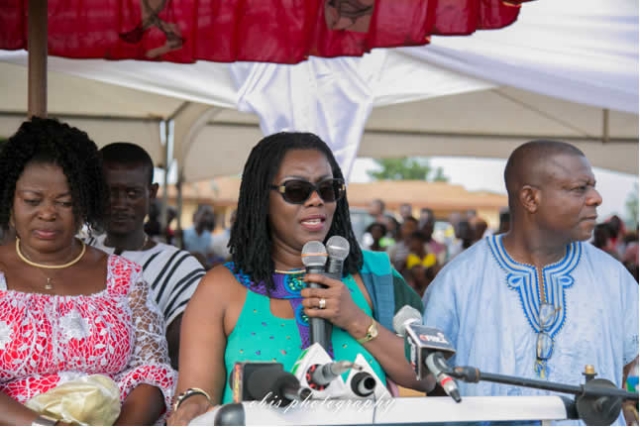 Minister for Communications and MP for Ablekuma West, Ursula Owusu-Ekuful, has accepted the offer to become the Development Queen (Nkosuohemaa) of Akyem Asuom in the Kwaebibirem District of the Eastern Region.

The offer was made to her by the Chiefs and people of Asuom when she attended the 75th Anniversary celebration of Nana Yaa Anamah II, the longest-serving queen mother of Akyem Abuakwa Traditional Area at Asuom on Saturday, 11th November 2017.

Ursula Owusu-Ekuful was at the event to represent the President.

When she arrived at the Durbar grounds in the company of Carlos Kingsley Ahenkorah, Deputy Minister for Trade and MP for Tema West, who incidentally hails from Asuom, she was hailed by the jubilant crowd.

The security guards on duty had a difficult time ushering the legislator to her seat.

The chiefs of Asuom say her virtues, educational and political backgrounds and achievements in life as a woman of substance influenced their decision to make her the Development Queen (Nkosuohemaa).

In her acceptance speech, Ursula Owusu-Ekuful assured the people of Asuom that she will team up with other prominent natives of the Constituency such as Hon. Carlos Kingsley Ahenkorah, Hon. Kwasi Amoako-Attah, Minister of Roads & Highways, Hon. Antwi Boasiako, DCE of Kade, Hon. Ohemeng-Tinyase, MP for Kade, Oheneba Charles and others to bring development to the town.

She relayed the President’s delight to note that the longest-serving queen mother of AKyem Abuakwa is from Asuom, and assured Nana Yaa Anamah that her prayerful wish that a Vocational Training Centre should be built and named after her will be supported by Government.

In a congratulatory message read on behalf of Osagyefou Amoatia Ofori Panin, Okyenhene, the Adontenhene of Akyem Abuakwa Traditional Area, Daasebre Boamah Darko, said: “Your courage, politeness and intelligence that have characterized your image always leave an indelible positive impact on the people you meet and interact with. Without a doubt, Nana Yaa Anamah, you have distinguished yourself in the performance of your customary and statutory duties throughout your seventy-five years (75) on the throne as the Asuomhemaa. This is the reason for which you have been awarded the Okyeman Kanea by the Akyem Abuakwa Traditional Council presided by me, Osagyefou Amoatia Ofori-Panin, Okyenhene, and Asuomman is crowning it all with this colourful durbar”.

Her Royal Majesty, Nana Adutwumwaa Dokua II, Okyenhemaa also congratulated Nana Yaa Anamah II, saying, “Indeed, any nation that does not honour its heroes and heroines is not worth dying for. Nana Yaa Anamah has devoted her whole life serving the chiefs and people of Asuom and Akyem Abuakwa.  Enstooled at her tender age of about 25 years, Nana Yaa Anamah has served her people for more than 75 years; and we thank God that she is alive today to be celebrated”.

He said the sons and daughters of Asuom are proud of her latest highest Okyeman Kanea award conferred on her by Okyenhene. The Asuom chief continued that the award is a clear manifestation that she did not serve Asuomman alone, but the Akyem Abuakwa and Ghana as a whole.

An appeal for funds to raise money to build the Vocational Training Centre has been launched with support expected from the President and his wife, Ministers, MPs, Ministry of Education, Corporate bodies and donations from the sons and daughters of Asuom.