US and Canada reach new trade deal to replace Nafta 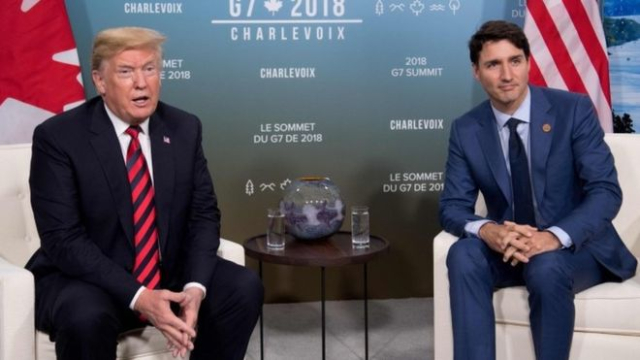 The US and Canada have reached a new trade deal, along with Mexico, to replace the current North American Free Trade Agreement (Nafta).

The United States-Mexico-Canada Agreement (USMCA) is said to involve more US access to Canada's dairy market and a cap on its car exports to the US.

However, the joint US-Canada statement did not give details of the agreement.

US President Donald Trump has long sought to change Nafta, which governed more than $1tn (£767bn) in trade.

Until recently it looked as if Canada could be excluded from a final agreement.

"Today, Canada and the United States reached an agreement, alongside Mexico, on a new, modernized trade agreement for the 21st Century: the United States-Mexico-Canada Agreement," US Trade Representative Robert Lighthizer and Canadian Foreign Affairs Minister Chrystia Freeland said in a joint statement.

The agreement "will give our workers, farmers, ranchers and businesses a high-standard trade agreement that will result in freer markets, fairer trade and robust economic growth in our region".

It comes as the US has fought a trade war on several fronts this year, including placing tariffs on steel and aluminium imports from Mexico and Canada.

What is in the new deal?

While the exact details of the agreement have not been released, the new accord is expected to contain key provisions on Canada's dairy industry and car exports to the US.

US farmers will have access to about 3.5% of Canada's dairy market, Reuters reported, citing sources.

Canada is also reported to have secured some protections for its automobile industry against potential US tariffs.

US tariffs on steel and aluminium will remain for now, the sources said.

How was the deal reached?

The US made a deal with Mexico in August, but relations with Canada over the trade pact had become increasingly strained in recent weeks.

The Trump administration set Sunday as a deadline for Canada to strike a deal.

A protectionist policy under the Mr Trump has seen the US forge ahead with individual trade deals, rejecting bigger multi-lateral trade agreements and posing a challenge to decades of global free trade.

As part of this policy Mr Trump has also launched a trade war against China, which has already hurt companies and could curb global economic growth.

US-China trade row: What has happened so far?

This deal has been 13 months in the making – and there were times when it seemed like the finish line might never be reached.

More than once US President Donald Trump threatened to tear up Nafta, or leave Canada out in the cold after coming to a bilateral agreement with Mexico in August.

The relationship between the American and Canadian leaders seemed to grow rocky as the talks dragged on.

So having an agreement will come as a relief to the many industries in both the US and Canada that depend on Nafta and that have been living with uncertainty since the talks began.

Still, while Mr Trudeau has maintained he would not agree to a deal that was not in Canada's best interests, they will be waiting to get a clear picture of what concessions were made in the final hours to secure the agreement.