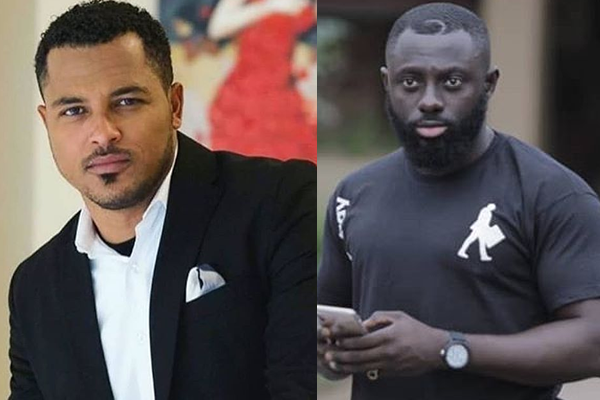 Actor Van Vicker has called out movie producer, Kofi Asamoah for saying the white man is wiser than the black man.

In a video posted on Instagram, Mr Asamoah showed his followers inventions of the white man which he said the black man cannot create for himself.

“I expect him to know better. Wait, who says that anyway? No one has time for such trivial words,” Van Vicker wrote in an Instagram post.

The actor stated that as an industry person who is supposed to project the country and the continent, it was unfortunate that he would make such utterances.

“BLACK & WHITE can make this world a better place; together. Unequivocally, there are uncountable BLACK MEN who are wise, successful and powerful,” he added.

As I watched a video @1kofiasamoah posted I was deeply afflicted. He is a movie producer makin a name 4 himself. @ 1time tho I never meant him or wished him success. I surmise Kofi Asamoah meant well wit his video, not sure tho if he was inspiring, condemning or a bit of both. U see, I’ll not castigate him or use boorish words but I wish 2 express my adverse fate @ his choice of words. How can he perpetuate such a disposition? Hard truth or not, it is preposterous. As a colleague film maker, he is 2 help change the mind set of the next generation, BLACK & WHITE. He is 2 project Ghana & Africa in a manner that the World will hanker 4. Kofi, speak the chapter & verse but provide solutions in your films. Sorry, but I’ll not mince my words, I’m utterly disgruntled @ his utterances that “a Black Man can never be wiser than a White Man” because I expect him 2 know better. Wait, who says that anyways? In this era where even the underdeveloped nations are scrambling though gradually, 2 be a leader at bleeding edge technologies? No 1 has time for such trivial words. BLACK & WHITE can make this World a better place; 2gether. Unequivocally, there R uncountable BLACK MEN who R wise, successful & powerful. Just 2 give Kofi a glimpse of enlightenment: When he sits in his car & changes the AUTOMATIC GEAR SHIFT, he should thank THE BALCK MAN, whilst he is @ the TRAFFIC LIGHT he should do same, thank THE BLACK MAN. Everytime he looks @ his WATCH he shld thank THE BLACK MAN. When he steps out & the AUTOMATIC ELEVATOR DOOR CLOSES he shld thank THE BLACK MAN. When he switches on the ELECTRIC LAMP in his living room, he shld thank THE BLACK MAN. When kofi takes a dunk 3 times a day in his MODERN TOILET he better thank THE BLACK MAN. When he takes his girls out & gets them POTATOE CHIPS how can he not thank THE BLACK MAN. If Kofi in his life time sees a live BLIMP WITH ELECTRIC MOTOR & DIRECTIONAL CONTROLS he will thank THE BLACK MAN. I’m not sure he has SECURITY CAMERAS @ his home but he must thank THE BALCK MAN 4 those @ the Flag Staff House. And God forbid that Kofi would need blood from a BLOOD BANK, he will most definitely thank THE BLACK MAN. #theyounggodfather #vanvicker