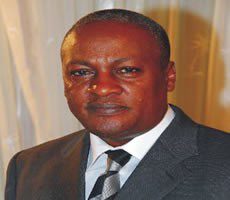 The office of the Vice-President, John Dramani Mahama, has dismissed speculation that he engaged in heated exchanges with Works and Housing Minister, Alban Bagbin, over the STX Housing Project.

Mr. Bagbin is rumoured to have called the bluff of the Vice-President after he was ordered to terminate the STX deal.

But spokesperson for the Vice-President, John Jinapor, says no such thing happened.

He told Joy News Mr Mahama “is shocked and very surprised that such a concocted and fabricated story can come of the Ghanaian media.”

Mr Jinapor said although there had been several meetings between the Vic-President and the Works and Housing Minister in an effort to salvage the STX Housing project, at no meeting and at no point in any meeting was there heated exchanges between the two men.

He cannot state the days and dates of the meetings but is sure “there have been a lot of meetings, all of which have ended in a very, very peaceful manner.”

“The Vice-President is not noted for that; he is a gentleman, a calm person and certainly would not resort to such things. I think that this is a fabricated story by people who are bent on tarnishing the image of the Vice-President,” the spokesperson added.