Vienna City up in flames 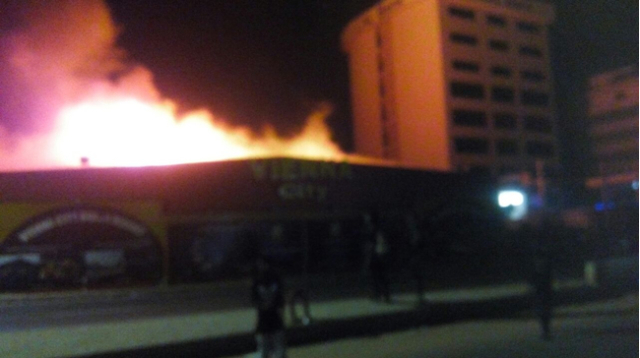 Vienna City, a popular night club and entertainment centre located at Circle, Accra is on fire. The fire is said to have started around 7:00 pm, Thursday.

It is not clear yet what caused the fire but properties running into thousands of cedis are up in flames. Vienna City is just opposite the Goil filling station which was reduced to ashes on June 3, 2015, the night of flood and fire disaster which claimed some 150 lives.

Joy News' Latif Iddris says fire officers have come with about six fire tenders and are desperately trying to douse the flames.

Residents, some of whom still remember the gory impact of the June 3 disaster are giving a helping hand to fire officials to ensure the fire does not degenerate.

The residents alleged that at the time the fire was raging, a tanker was discharging fuel at a Shell filing station located inches away from the Vienna City. They feared the fire may spread to the tanker and escalate the situation.

However, Station Manager at the Shell filling station later explained to Joy News that the tanker had already completed offloading the fuel hours before the fire but the tanker was just parked at the station to be moved tomorrow, Friday.

The workers of Vienna City are also trying to have access to the Casino which is the heart of the Vienna City to salvage what may be left of the disaster.

The owner of the Casino has told fire men he still has lots of money in the facility and is hoping the firemen will prevent the fire from moving in that direction.

A fire officer has been caught up in the blaze and has been rushed to the hospital. There was a spark of fire around the Casino area which the fire man was engulfed in.

Some workers suspect the fire may have been caused by one of the airconditioners.

A little over an hour after the fire fight, Latif Iddris says about 90 per cent of the fire has been put out with some smoke billowing into the air.

Power has been put out in the area as a strategy to fight the fire. The police have now mounted a blockade preventing people from going close to the fire area.

A number of ambulances have also been brought to the scene to take care of casualties that may occur.

The Public Relations Officer of the Ghana Fire Service Timothy Osafo -Affum later confirmed to Iddris the fire has been completely put out. He blamed some combustible materials within the premises of the Vienna City for the quick spread of the fire.

He said his outfit will soon provide a report on the incident with details on what caused the fire.