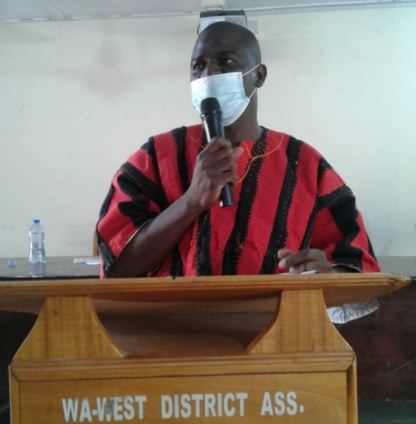 The Wa West District National Youth Authority (NYA), on Wednesday, launched a Youth Peace Campaign to drum home the need for all, especially the youth, to champion peace before, during, and after the December 7 general election.

The launch at Wechiau in the district brought together youth groups in the district including the Wa West District Youth Parliament, Activista Ghana, and Ghana Youth Federation to sign the National Youth Charter.

Also present at the launch were representatives of the National Democratic Congress (NDC) and the New Patriotic Party (NPP), National Commission on Civic Education (NCCE), and the security agencies, as well as some first-time voters in the district, among others, to pledge their consent to peace in this electioneering period and beyond.

Mr. Wuurah noted that they would partner with the Information Service Department and the NCCE as well as other institutions and agencies to execute the campaign.

He said they would visit churches, mosques, market centres, and the various communities to preach the need for the people to eschew violence before, during, and after the election.

Mr. Wuurah urged the young people to be ambassadors of peace and to propagate peace everywhere they found themselves in this electioneering period.

“General elections all over the world most often than not are characterised by violence and acrimony with the youth being the perpetrators and victims of the consequences and Ghana is not an exception,” he observed.

He also entreated the youth and political activists to conduct their political activities on developmental issues that could inure to the benefit of the general populace.

“Politics is the business of the people and must be done to benefit the people, so we should sell our ideas to the electorates in a decorum and civilised manner,” Mr. Wuurah said.

He noted that Ghana had made significant progress in democracy with free media being guaranteed, but that the country’s election was still characterised with pockets of violence which had the tendency to ruin its successes.

He advised the youth to recognise their potentials and develop them rather than engaging in acts that could plunge the nation into chaos and that the youth were the most affected in any conflict situation.