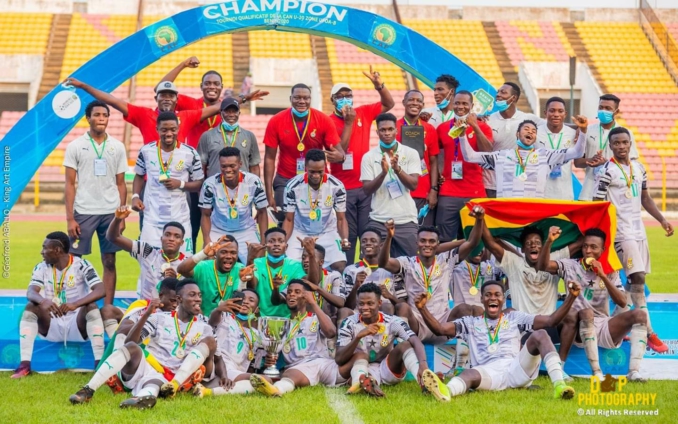 Ghana have been crowned winners of the 2020 Wafu B Cup of Nations following a 2-1 triumph over Burkina Faso in Saturday’s final in Benin.

Kouame Jean Fiacre Botue scored first for the Young Stallions but captain Daniel Afriyie and Precious Boah hit back for the Black Satellites at Stade Charles de Gaulle in Porto-Novo.

Abdul Karim Zito’s outfit not only leave Benin with the trophy but also have a qualification ticket for the 2021 Africa U20 Cup of Nations in Mauritania.

Afriyie was among the returnees to the coach’s line-up for the final, taking back his place – at the expense of Issah Huda – after dropping to the bench for the semi-final 5-3 penalty shoot-out win over Niger. Ofori McCarthy was also a new face in the starting set-up, replacing Abdul Mugees Zakaria.

Burkina Faso opened the scoring in the 16th minute through Kouame who capitalised on a defensive error to put his side 1-0 up.

Afriyie, however, repaid coach Zito’s faith with the equaliser five minutes to half-time after pouncing on a Boah free-kick.

Boah turned finisher in the second half, putting in a 79th minute free-kick into the net in what would ultimately turn out to be the match-winner.

The cup triumph is a massive relief for Zito who was heavily criticised for the team’s poor display of football at the tournament despite making it to the final.

“Everyone has his own opinion; this is a tournament that goes with winning and not about who plays good football,” Zito said ahead of Saturday’s final.

“Sometimes, it’s about the situation you find yourself in. You don’t necessarily have to play beautiful football to get results. We were in a position where we needed to get results within a short period. So, we planned for results instead of playing fine, fine football.

Ghana join host Mauritania, Burkina Faso, Gambia and nine other teams for next year’s U20 Afcon which runs between February 14 and March 4.

The top four teams at the continental championship will secure a qualification ticket for the 2021 Fifa U20 World Cup in Indonesia.