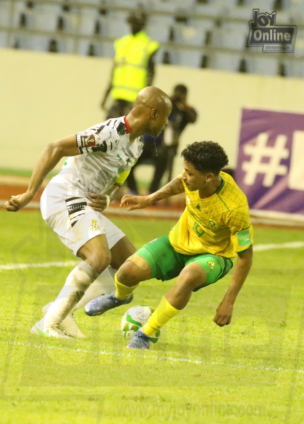 The South Africa Football Association (Safa) reportedly believes their 2022 World Cup qualifier game against Ghana on Sunday, November 14, may have been fixed following their defeat.

The association is calling on FIFA and the Confederation of African Football (CAF) to look into the performance of the match officials.

Bafana Bafana missed out on the chance to finish as leaders of Group G, after Andre Ayew stepped up to convert from the penalty spot to score the only goal of the game to give Ghana the win.

But Safa suspects Senegalese referee, Maguette Ndiaye, and his colleagues Samba Elhadji Malick (assistant I), Camara Djibril (assistant II) and Gueye Daouda (fourth referee), may have had a hand leading to South Africa’s failure to qualify to the playoffs of the qualifiers.

The referee awarded a spot-kick for what he deemed a foul on Black Stars defender Daniel Amartey by South Africa centre-back, Rushine De Reuck in the 32nd minute of the game, which was netted by the home team’s skipper.

Aside the penalty call, the South Africa FA believes some of the decisions of Ndiaye were questionable and suspects the officials may have been involved in match fixing.

“We suspect the game was fixed and our position is that it must be investigated. The conduct of the match officials left much to be desired and we want both Caf and Fifa to investigate. We salute the boys and the technical team for the good work they have done,” incensed Safa CEO Tebogo Motlanthe told South African outlet TimesLIVE after the game.

Safa also informed the match commissioner on the day, Nigeria’s Kachalla Babagana Kalli of their plans to call on Fifa and Caf to intervene in the situation.

According to reports in South Africa, their FA is expected to address the nation this week and detail how the necessary steps to take with regards to challenging the outcome of their game against Ghana.

Safa will also ask Fifa and Caf to attend to the issue with urgency and ask for the match to be replayed in a neutral venue rather than Ghana.

The results at the Cape Coast Stadium saw Ghana and South Africa both finish on 13 points, with Ghana advancing to the next round of qualifying due to more goals scored.