We stand by our MD’s comments on Ghana’s economy; major drivers are Covid-19, Russian/Ukraine war – IMF 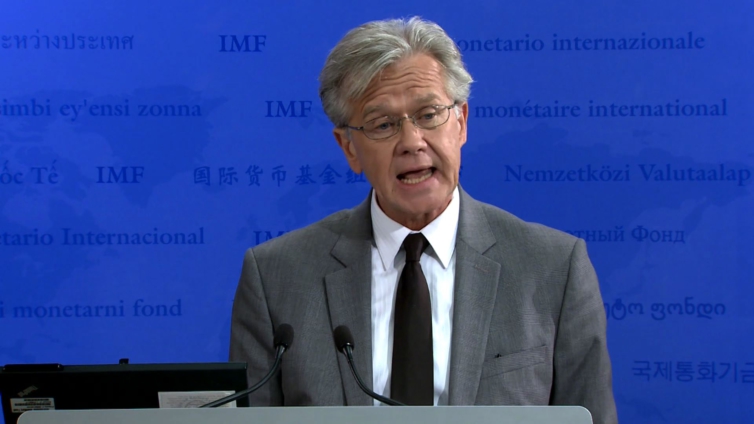 The International Monetary Fund (IMF) has backed claims by its Managing Director, Kristalina Georgieva, on the current state of the Ghanaian economy and its major causes.

The Fund’s Director of Communications, Gerry Rice, at a press conference maintained that just like any other economy, the current Ghanaian economy has been pressed very hard by developments in Ukraine as well as Covid-19 shocks.

He, therefore, believes the country’s current situation has been compounded by development which can be described as external shocks.

Mr Rice said this while responding to a question by a journalist during a virtual press conference.

Question: And then also, on Ghana, same thing, only there’s criticism by former President Mahama of the IMF seeming to praise, to say that the economic problems there, are entirely results of Covid-19 and the Ukraine war, and seeming to praise the government. I guess maybe that’s just diplomacy, but can you address that criticism and then, finally smaller country?

Mr Rice said, “I would say, as just to repeat, the war in Ukraine has triggered a global economic shock that’s hitting Ghana.

“For many of these countries, their room for fiscal manoeuvre, if I could put it that way, is already extremely limited because they’ve used a lot of fiscal power already, firepower already in the pandemic.”

He added “so, the shock coming from the war in Ukraine compounds other pressing policy challenges. And we’re very cognisant of that. And that’s why we are, as I described at the beginning, stepping up to help countries where we can, and that includes Ghana.”

The IMF Managing Director in a recent interview with JoyNews’ Benjamin Akapko on the sidelines of the Africa Adaptation Summit in Rotterdam Netherlands maintained that the current challenges facing Ghana cannot be attributed to bad policies by government, but rather external shocks like Covid-19 and developments in Russia and Ukraine.

She maintained that it was the combination of these shocks that had a negative impact on Ghana.

“First the pandemic, then Russia’s war in Ukraine. We need to realise that it is not because of bad policies in the country but because of this combination of shocks, and, therefore, we have to support Ghana,” she said.

State of Ghana’s Program with the IMF

Mr Rice also announced that an IMF mission is expected in Ghana in the coming weeks to continue talks with government over discussions for a Fund program.

The IMF Communications Director added that “We had an IMF staff team in Accra in July to begin initial discussions with the Ghanaian authorities. And we characterized that mission as constructive, kickstarted the process, and laid the groundwork for engagement, which now continues.”

Government has revealed that they are hoping to commence official program negotiations with IMF by the end of September 2022.

This will be more of seeking approval for its Enhance Domestic Program a document which makes some proposals on how to turn around the economy and deal with its rising debt stock.

The IMF Managing Director has maintained that they are hopeful of reaching an agreement with the Government of Ghana for a Fund program by the end of September 2022.

Some analysts have maintained that the expected stability and possibly economic turnaround will largely be dependent on Ghana closing a program with the IMF.

That will impact the current challenges facing the Ghana cedi and deal with the investor sell-offs that have hit some of Ghana’s bonds.

DISCLAIMER: The Views, Comments, Opinions, Contributions and Statements made by Readers and Contributors on this platform do not necessarily represent the views or policy of Multimedia Group Limited.
Tags:
Gerry Rice
IMF
Kristablina Georgieva