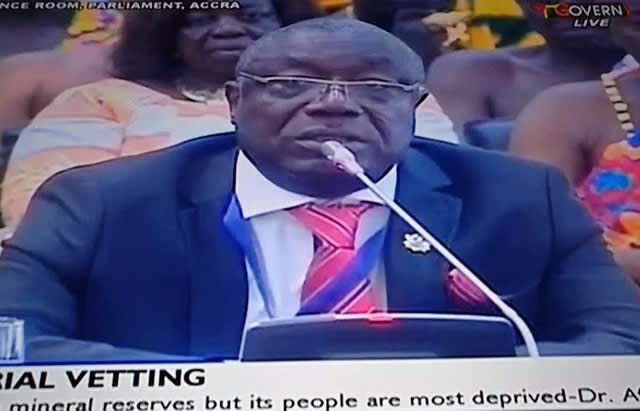 President Akufo-Addo's nominee for Western regional minister Dr. Kwaku Afriyie has lamented the state of development in the region despite its unparalleled natural resource potential.

The Western region is blessed and cursed he said during his vetting before the Appointments Committee of Parliament Tuesday.

Profiling the resource base of the region, Dr. Afriyie who is also a former minister for Lands and Natural Resources said 60 percent of Ghana's chief foreign exchange earner cocoa farming goes on in the region.

"Virtually 100 percent of rubber estates and 40 percent of palm oil plantations are also in the region along with the only bauxite mines at Ayaso," he said.

The Western region holds a significant forest reserve in addition to deposits of manganese and has also overtaken the Ashanti region as the leading gold producing region in Ghana.

The country latest natural resource discovery, oil was also found in the Western region. Ghana, per the region's Jubilee partners struck oil in commercial quantities in 2007 in the Western Region.

But three years after this discovery, the chiefs in the region decried marginalisation in the development of the country and complained that the region has nothing to show for despite its resource contribution.

In a move which the regional House of Chiefs described as “act of desperation”, the chiefs petitioned parliament for 10 percent of oil revenue to be dedicated to the region.

Although the demand was later withdrawn, it re-surfaced barely six years later with a call for 20 percent allocation.

Taking this account into consideration, the nominee said there is a general feeling in the region that it is among the neglected in the country.

While he won't back the call of an allocation of oil revenue, he said there can be other ways of ensuring the region gets its fair share of the national cake.

"Our roads are the worse in this country", he said explaining that because the region has the highest rainfall in the country, roads deteriorate much faster than in others.

He said governments have often used the heavy rains the region experiences as an "excuse" to explain away the poor state of roads.

He said at the peak of the spread of HIV/AIDS, the prevalence rate recorded in the mining areas was one of the worst in the country.

Touching on the disruptive effect of illegal mining in the region, Dr. Kwaku Afriyie said he would need "24 hours to give you a whole lecture on environment degradation".

The Western regional minister-designate said the call for development to match the region's resource contributions is not a "jingoistic" demand.

"If government does not invest in Western Region, Ghana will forever remain poor" he warned. Dr. Kwaku Afriyie who is also a cocoa farmer said although Western region uses 1.6 hectares of land for cocoa farming, Ivory Coast which uses the same land size, exported more than 1.7 million tonnes of cocoa. Ghana did about 700,000 tonnes.

He found this disparity regrettable noting that Ghana has all that it takes to do two or three times more than it currently exports for cocoa if the right investments are made in the Western region.

With the New Patriotic Party (NPP) government plan to establish a factory in each of Ghana, 216 district's, the regional minister-designate wants to suggest a cocoa waste processing factory in Sefwi area.

He said as a regional minister he will work to influence policies that affect his region.

"I will not be a static minister" he vowed to get involved in tackling the region's problems.