Where is Ghana’s policy on China? – Dr. Amoah quizzes government 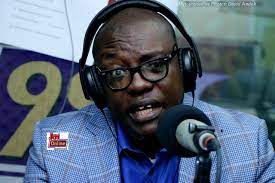 The Director of the Centre for Asian Studies at the University of Ghana, Dr. Lloyd Amoah, is urging the government to revisit its own policy on China when engaging the country.

According to him, it is a risky game to engage a country like China without a formidable plan setting out terms of engagement.

His statement follows concerns over Ghana’s long battle with illegal mining popularly known as galamsey and the consequent pollution of river bodies and farmlands by some Chinese nationals and their Ghanaian counterparts.

Speaking on PM Express, he noted that, the situation has been worsen by government’s attitude towards its policy on China; making it a sitting duck for the behemoth.

“In terms of the competition between the two sides, one is weak, one is strong and the stronger side will effectively exploit the weaker side and the Chinese are showing how clear they are in their minds that this is what they want to do.”

He added that, “what you have now is a country with too many Achilles’ heels and of course the Chinese will exploit it.”

Describing the effects of galamsey on Ghana’s lands and natural resources as the “scars of war”, Dr. Lloyd Amoah called on government to make public the country’s policy on China and abide by it in order to salvage what is left of the country.

DISCLAIMER: The Views, Comments, Opinions, Contributions and Statements made by Readers and Contributors on this platform do not necessarily represent the views or policy of Multimedia Group Limited.
Tags:
Aisha Huang
China
Ghana