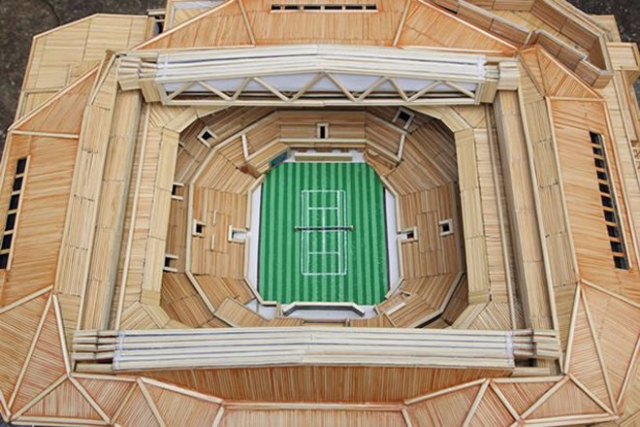 Shaminder Singh, 31, started his project ten months ago and has spent 40 hours a week patiently cutting and gluing tens of thousands of toothpicks.

The forklift driver bought the teeny pieces of wood from dozens of supermarkets to get the perfect mix of colours for the replica he built in his bedroom.

His incredible model of the world's most famous tennis court features the iconic retracted roof, balconies, tiers and stairwells – and of course the Royal box.

Single Shaminder from Coventry estimated he spent around 1,600 hours on his model which he completed just in time for the 2017 competition.

In 2015 he made a teeny Old Trafford stadium out of 600 toothpicks, and a recycled plastic cricket stadium in memory of the late Australian cricketer Phillip Hughes.

Speaking today, he said: "I have spent a lot of time working very hard on my model but I am very proud of it and very pleased with how it looks.

He will be visiting the real thing this summer (Photo: SWNS.com)

"After having made a cricket model and a football model, I decided that I wanted to make something different so decided on tennis.

"I used only good quality toothpicks as I did not want ones that would break easily, and I visited different shops like Tesco and B&M because I wanted to have different colours.

Sharminder spent up to 40 hours a week on his project (Photo: SWNS.com)

"I made it all after I got home from nightshifts at work.

"When I came back from work after finishing at 6am, I would have two hours rest and then I would spent two, three, or four hours hours on the model.

"Any holidays and days off I have had, I have spent making the model. I have not taken holidays away. Once I spent 15 hours continuously working.

He hopes to sell the model to raise money for charity (Photo: SWNS.com)

"I find it a good way to relax because working night shifts can be very hard.

"I'm really pleased with how it has turned out.

"My family and friends are really proud of me."

Shaminder, who lives with his parents and brother, built the model in his bedroom, and used a glue gun, pliers, tweezers, a small saw and a cutting blade.

It measures more than a metre in length and is around 50cm tall.

His favourite tennis player is Roger Federer – who he describes as "the master" – and he plans to watch Wimbledon this year.

He hopes to make more models in the future from toothpicks which he hopes to sell to raise money from charity.