World Cup 2022: Brazil ‘in pain’ after exit on penalties against Croatia 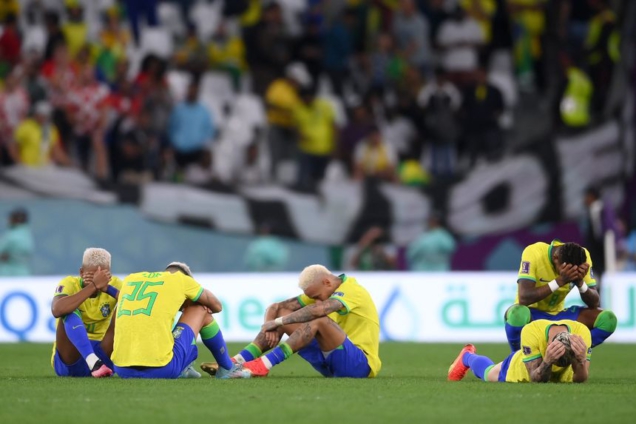 Brazil had danced into the quarter-finals of the World Cup but their dreams of a showpiece jig in the final ended in tears at Education City Stadium.

Croatia schooled the Samba stars on penalties to end hopes of a sixth triumph as they were dumped out of the competition by a European nation again.

It looked like Neymar would be the hero when he opened the scoring in extra time to equal Pele’s official scoring record for the men’s national team but – as the unused fifth penalty taker – he left the field in tears after what could be his final World Cup match.

After the game, it was confirmed that boss Tite would be leaving his job, the 61-year-old unable to add to his Copa America triumph in 2019, while Neymar hinted at international retirement.

“It is indeed very difficult,” Tite said after the loss. “But it is the end of my cycle with the Brazil squad. I said that one and half years ago.”

“That is what it is going to feel like in the next few hours for Brazil fans. Croatia have sent the far bigger nation into mourning. This will really hurt for a long time.

“I hope the population will not turn on them. Brazil crowds can be vicious. I hope there isn’t a negative backlash because this team don’t deserve it.”

Should Neymar have taken first penalty?

The opening 90 minutes were engrossing but the sides could not be separated and the contest went into extra time.

Croatia have been there in eight of their past nine knockout games in major tournaments and there was only one outcome thereafter.

Neymar thought he had stood up for his country when they needed him the most, firing into the roof of the net to finish a slick team move.

The 106th-minute strike was his 77th international goal, drawing him level with the great Pele according to Fifa records.

But Bruno Petkovic’s equaliser four minutes from time – which was Croatia’s only shot on target – salvaged hope of progression which they settled on spot-kicks.

It was the opposition that were dancing this time as a disconsolate Neymar sank to the turf, tears streaming down his cheeks.

He was to be the fifth penalty taker but did not get that opportunity after Marquinhos struck the post to seal their fate.

The same sorrowful ending has happened before.

At his home World Cup in 2014 Neymar’s participation was ended by a back injury, and four years ago they were beaten at the same stage by Belgium.

Here he was one of the last players to trudge off the pitch, Brazil’s supporters sitting in the stands in disbelief, their hopes in Qatar extinguished.

“Neymar was the fifth because that is the decisive one,” said Tite. “There is more pressure and the players who are more mentally prepared should be ones to take this last penalty kick.”

But former Germany striker Jurgen Klinsmann disagreed on BBC One, saying: “He would have been my number one penalty taker. You need him to set the tone.”

‘End of the dream’

Brazil’s World Cup was ended by a European nation for the sixth consecutive tournament, and they last beat a side from that continent in the 2002 final against Germany.

That was also the last of their five World Cup triumphs, and it has been 20 years since a non-European side lifted the trophy.

The statistics make for grim reading for Brazil.

The South American side have been slow starters and have failed to score in the first half of six of their past seven matches in the competition.

Had Vinicius Junior or Neymar put away the opportunities that fell their way in the opening period it may have been a different outcome.

Tite’s men also became the first team in World Cup history to be eliminated from a knockout match in which they scored the opening goal during extra time.

Meanwhile, the last time a nation ranked world number one reached the semi-finals was when Brazil did so back in 1998.

“It is not only myself that loses, the entire team loses,” said Tite. “We tried to focus on chances and finishing. Our strategy was to increase the volume – we had 19 chances and 11 shots at goal. They could not have one shot on target.

“Let’s keep moving forward because in life we can never give up.”

Brazil website Globo Esporte bemoaned the ‘end of the dream’ on its home page.

It was for Tite, his players and all Brazil supporters.

DISCLAIMER: The Views, Comments, Opinions, Contributions and Statements made by Readers and Contributors on this platform do not necessarily represent the views or policy of Multimedia Group Limited.
Tags:
Brazil
Croatia
Qatar 2022 World Cup