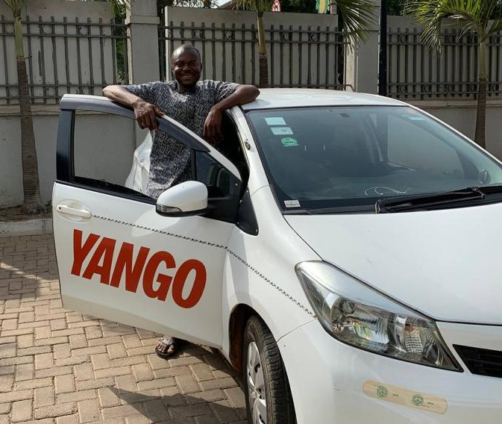 Yango allows many young Ghanaians to work on their own. In two years of activity in Ghana, the carpooling multinational has enabled many young people to set up their own taxi companies.

This is the case of Mohamed whose company, The Truth Yango, today has 64 cars that he financed himself. In this article, we tell you about the experience of Mohamed Ayaba.

The meeting with Yango

Before joining Yango as a partner, Mohamed was an online driver and made a hard living. As he told us in a recent interview, Mohamed met Yango through a friend. He was immediately seduced by the project offered to him by the multinational ride-hailing service. Indeed, better than a job, Yango offered Mohamed a business partnership.

The drivers working for Mohamed enjoy the fair and otherwise beneficial partnership: «It is a real win-win partnership. I get some advantageous earnings, and my drivers benefit from health coverage. They are assisted and supported in the event of illness or accident».

Yango’s most trusted partner in Ghana

Mohamed Ayaba is convinced he made the right choice by joining the Yango family. And for this, it has a very relevant indicator. Indeed, as he likes to recall, before starting to work with Yango as a partner, Mohamed only owned two cars.

Now, he owns 64 and employs as many drivers.

“Yango has truly changed my life and that of many drivers. In addition to making it easier for them to acquire a car, it offers them very affordable salary conditions.”

The partners of Yango allow many young Ghanaians to acquire vehicles through leasing. The reimbursement is then spread over several years, which allows these young entrepreneurs to own their own car at the end of the contract.

Another option is if they have the means to acquire a car on their own and collaborate with Yango as a driver. In both cases, it is Yango who provides them with the customers through its application.

In Mohamed believes, “Yango is the ride-hailing multinational service that offers the best conditions to its partners in Ghana, particularly in terms of the commissions offered. It encourages young job seekers to explore this opportunity.”

However, he urges Yango to invest more in the market because, he assures, the market is still little exploited.

He suggests that Yango allow partners like him to invest more in advertising to expand their customer base. Yango would also be a winner according to Mohamed Ayaba.

DISCLAIMER: The Views, Comments, Opinions, Contributions and Statements made by Readers and Contributors on this platform do not necessarily represent the views or policy of Multimedia Group Limited.
Tags:
Ride-Hailing service
Yango