The International Committee of the Red Cross (ICRC) has helped repatriate 128 rebels from Saudi Arabia to Yemen.

It comes two days after the Saudi-led coalition fighting the rebels said they would release 200 Houthi prisoners and allow medical cases to be flown out of Yemen’s rebel-held capital.

Sanaa’s airport has been closed for years amidst Yemen’s ongoing civil war.

But monitors believe the death toll is far higher. The US-based Armed Conflict Location and Event Data Project (ACLED) said last month that it had recorded more than 100,000 fatalities, including 12,000 civilians killed in direct attacks.

An ICRC statement said it had helped repatriate the prisoners after a request from the Saudi-led coalition. The group verified prisoner identities and checked that they wanted to return to Yemen before sending them back.

Today we are repatriating 128 #detainees from #KSA to #Sanaa.
We welcome this initiative and we are pleased to see humanitarian considerations taken into account for the sake of the families waiting for their loved ones to return home.

His office tweeted that he thanked the Saudis for releasing the detainees and for “the opening of Sanaa airport for mercy flights that would allow Yemenis to receive much-needed medical treatment abroad”.

It remains unclear if the 128 repatriated prisoners are among the 200 Houthi rebels the Saudis announced would be released on Tuesday.

Kedir Awol Omar, ICRC Saudi Arabia’s head of mission, said he hoped the prisoner releases by the Houthis and the Saudis “will create a positive dynamic and will allow more detainees to be reunited with their families”. 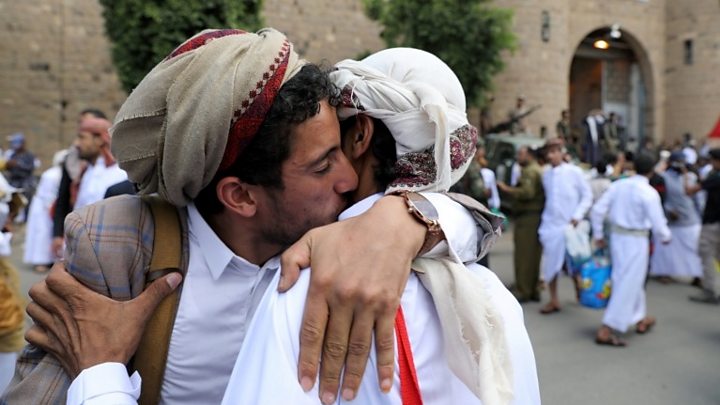 Yemeni detainees hug relatives after being released by Houthis in Sanaa

Fighting in Yemen has caused the world’s worst humanitarian crisis.

About four-fifths of the population – 24 million people – are in need of humanitarian assistance or protection, including 10 million who rely on food aid to survive.

But recent reports suggest peace efforts are gathering pace. A senior Saudi official told Reuters earlier this month that the country had had an “open channel” with the Houthis since 2016.

“We are continuing these communications to support peace in Yemen,” he said.