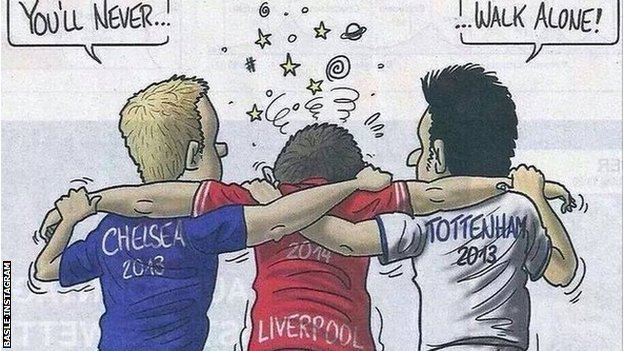 Swiss champions FC Basel celebrated their Champions League group-stage progression at Liverpool by taking a cheeky swipe at a host of their recent English victims.

The Swiss Super League outfit drew 1-1 at Anfield to take four points from Liverpool in Group B, beat Chelsea twice in last season's competition and dumped Tottenham out of the 2012-13 Europa League.

The hat-trick of successes over three of England's biggest club's prompted a witty Instagram post  containing cartoon caricatures of a player from each of the London clubs carrying away a dizzied Liverpool counterpart.

The sketched characters console the Liverpool player with the Anfield club's slogan "You'll Never Walk Alone", but the witty jibe was met with some prickled responses on social media.

Unrelenting in enjoying another famous success on English soil, Basel followed up with an image of players, including former Liverpool man Philipp Degen, celebrating wildly in the Anfield away dressing room.

The 17-time Swiss champions last made the knockout stages in 2012 but failed to escape the group stages last year and will now eagerly await Monday's draw.