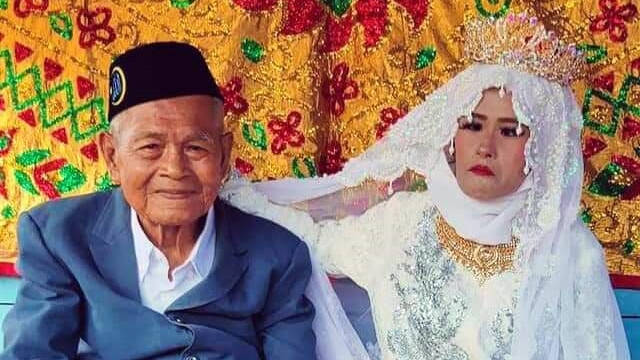 Since late last month, Indonesian social media has been buzzing with news of a controversial wedding in South Sulawesi, where a 103-year-old Dutch colonial war veteran recently married a 27-year-old woman.

Photos and videos of the unlikely couple on their wedding day have been doing the rounds online for over a week now, sparking both outrage and humorous comments.

There are also those who can’t believe the wedding was for real, but several Indonesian news outlets have confirmed that 103-year-old Puang Katte married a 27-year-old woman named Indo Alang in the District of Siwa, South Sulawesi. The groom, who is reportedly a widower, fought in the Dutch colonial war (1945 – 1949).

“Yes, it’s true, the was held this afternoon at the bride’s house on Jalan Galico street,” Ayu Anggreni Muchtar, a relative of the groom, told Liputan6. “I do not know his exact age, but he is definitely over 100 years old, he is a Dutch colonial war fighter. His wife is still in her 20’s.”

Tribunn News later revealed the real age of the newlyweds, Katte, 103 years old, and Alng, 27. The 76-year age difference shocked many in the Asia country, even though they are not entirely uncommon.

Back in 2017, we featured the story of a 71-year-old woman who married a 16-year-old boy, and just the other day Indonesian media revealed the case of another 103-year-old man who recently married a woman 66 years his junior.

Videos showing the hunched old groom being supported by a young man as he staggers down the aisle to meet his young bride have been shared on Facebook and Twitter, putting the question of arranged marriages into question once again.

Interestingly, the dowry paid by Katte to his bride’s family wasn’t that substantial, according to local media reports. he allegedly only paid 5 million rupiah ($343) and a gold ring. The two are currently living at the groom’s house in South Sulawesi.

DISCLAIMER: The Views, Comments, Opinions, Contributions and Statements made by Readers and Contributors on this platform do not necessarily represent the views or policy of Multimedia Group Limited.
Tags:
Indonesia
Puang Kate
Siwa
wedding