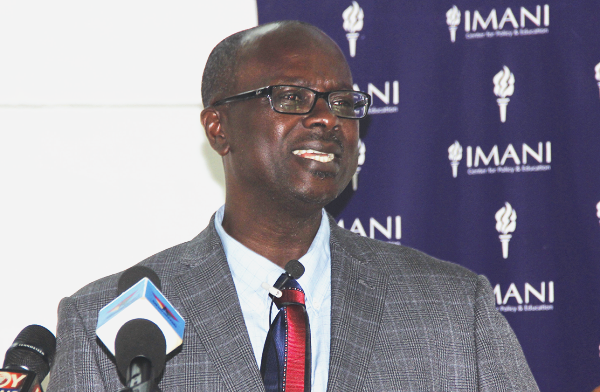 Fellow at the Centre for Democratic Development (CDD) Ghana, Prof. Kwaku Asare says the 1992 Constitution does not mention ‘Acting Auditor-General.’

He said, based on that any work carried out by any person for that invented position is an unconstitutional work.

“I want to emphasise that any work done by the Acting Auditor general is unconstitutional. Read the constitution and there’s no such thing as an Acting Auditor- General,” he stressed on the Super Morning Show, Monday.

His comments come as the Deputy Auditor-General, Johnson Akuamoah Asiedu, who has assumed the role of an ‘Acting Auditor-General’, expressed satisfaction over documents provided by the Senior Minister, Yaw Osafo-Maafo in defence of his $1m surcharge in the Kroll Associates deal.

Mr Akuamoah is acting in the stead of Daniel Yao Domelevo who was ordered by the President to take his leave starting July 1, 2020.

Prof Asare explained that if the substantive Auditor-General’s position is vacated, the deputy cannot assume the role because it is not constitutional.

“How can you have a substantive Auditor-General and an Acting Auditor-General. The constitution provides for one Auditor General at any point in time.”

“So the notion that you have an Auditor-General substantive and an acting Auditor General is repulsive to the constitution,” he said.

However, Deputy Attorney General, Godfred Damey who also spoke on the show said that Prof. Asare’s claim is false.

He also explained that the Chief Administrator of that Chapter is the Minister for Finance and that Chapter 13 makes mention of how the budget should be prepared for expenditure, granting of loans and other procedures, all of which the Auditor-General has a role to play according to the 1992 Constitution.