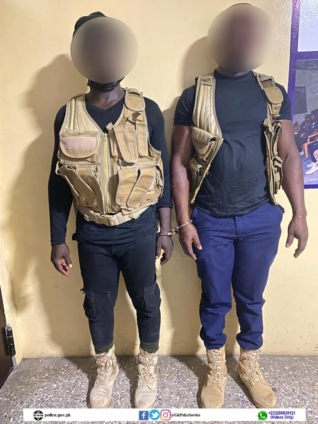 The Police have remanded two persons who showed up at the ongoing NPP Constituency Executive Elections in the Okaikoi South Constituency wearing clothing that created the impression that they were Police personnel.

The accused persons, John Essel Baah and Enock Kwame Bosompem were arraigned on Friday and have been remanded to reappear on May 10, 2022.

The Police, in giving updates on the matter after their arrest on Thursday, announced on Facebook, Friday, that it has arrested one other person, Ebenezer Painstil for a similar crime.

He also appeared before the court on Friday and has been remanded to reappear with the two other accused persons.

Meanwhile, the Police have arrested four other men posing as national security personnel at the Ayawaso North Constituency voting center.

One of them was seen with a side arm.

Regional Police Commander, DCOP Iddi Lansah Seidu said the Police have the capacity to provide security for the constituency elections and asked other sister security agencies to stay off the voting process.

Speaking to JoyNews, DCOP Iddi Lansah Seidu said the Police “have made it clear to the party officers that the Ghana Police Service is capable of conducting absolute security for this election, adding that “we do not want to entertain any other form of security at the polling station.”

“If you are a security organization and you find yourself here, you are an unwanted person,” he cautioned.