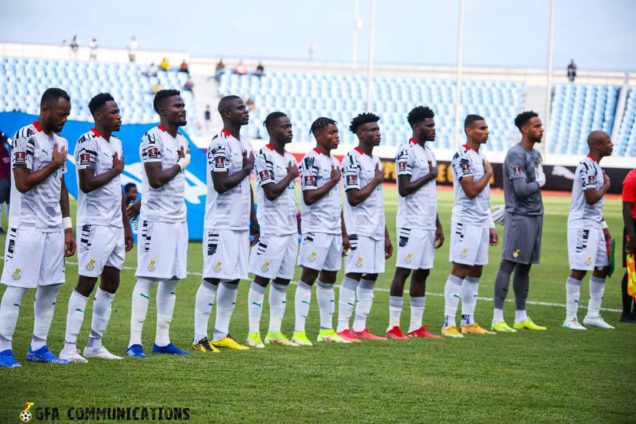 A first half free kick from Thomas Partey was enough to see off Zimbabwe as Ghana climbed to the summit of Group G in the World Cup qualifiers.

Having lost the reverse fixture 3-1, Zimbabwe needed results from this game to keep their feint hopes of qualification alive.

The Warriors started as the better team and forced the Black Stars to make mistakes.

Kamaldeen Sulemana came closest in the early exchanges after his feeble near post effort was parried away.

Thomas Partey stepped up to power a free kick from about 25 yards past the Zimbabwe goalkeeper after Baba Rahman was fouled.

Ghana settled after the goal and came close to a second when Daniel Amartey’s low effort was cleared off the line.

The Black Stars managed the second half and created half chances as Mohammed Kudus’ effort from range hit the crossbar.

The win sends Ghana to nine points as they climb above South Africa, who play Ethiopia later today.

Before the Black Stars flew for Harare, head coach Milovan Rajevac told his team that “everything is in their own hands.”

The victory against Zimbabwe affirms that stance as the Black Stars are now in pole position to qualify out of Group G.

If the four-time Africa Cup of Nations champions win their final two games against Ethiopia and South Africa, they will qualify from the group.

Ghana’s hopes of qualifying took a hit after an abysmal performance against South Africa which saw the team concede a late goal.

CK Akonnor was relieved off his duties after that defeat and the Ghana Football Association re-appointed Rajevac.

The Serbian, who calls Ghana his second home, took charge of the team he led to the 2010 World Cup semi-finals and has worked wonders thus far.

The team won a friendly game against lower tier side Soccer Intellectuals 8-0 before beating Zimbabwe 3-1 in Ghana.

Rajevac made a bold decision of dropping captain Andre Ayew for the return fixture against Zimbabwe, a decision which paid off after the Black Stars picked up a narrow win.

Partey, who is the first deputy captain of the Black Stars, got his chance to captain the team after Andre Ayew was dropped by Milovan Rajevac. Richard Ofori, who was next in line, was omitted from the squad due to injury.

As a result, Partey was given the armband ahead of this must-win game for the Black Stars in Harare.

The Arsenal midfielder scored match winning goal from a direct free kick in the first half to cap off a mature performance.

It wasn’t the first time 28-year-old scored whilst wearing the armband for the Black Stars.

Partey has captained Ghana on four occasion during his five-year spell with the national team and has scored a goal each time.

He first captained the Black Stars against Japan in a friendly in 2018. The midfielder scored from a direct free kick as Ghana beat their Asian counterparts 2-0.

A month later, Partey was on target as captain again in another friendly against Iceland which ended 2-2.

Partey was named as captain in a friendly a year later as he once again scored against Mauritania in a 3-1 win.

The Arsenal man has so far showed he has an eye for goal especially when he is named as captain.