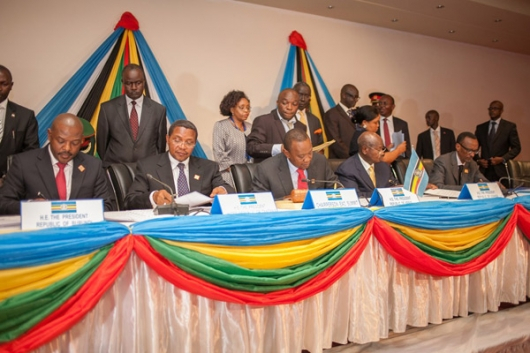 Countries in the East African Community are Wednesday expected to roll out the Single Customs Territory in a plan that could potentially cut down the cost of doing business in the region.

Under the Single Customs Territory (SCT), each of the five countries will deploy customs officials to all points of entry into the Community to collect duty.

The January 1, 2014, commencement date was agreed upon during a summit in November that brought together presidents from the five East African Community (EAC) partner states — Kenya, Uganda, Rwanda, Burundi and Tanzania.

“So far, customs staff from Uganda and Rwanda have been deployed to Mombasa and oil installations in Western Kenya, i.e Kisumu, Eldoret and Nakuru. These are considered to be the most critical areas,” said KRA in a statement.

The deployment will be expanded to other ports, which are still manned by KRA officials, following tomorrow’s launch of the SCT.

Kenya is yet to send officers to man western points of entry into the EAC in Rwanda and Uganda, a fact that KRA justifies by saying that Mombasa is the “main gateway” to the Northern transportation corridor.

KRA said that Burundi and Tanzania, which primarily rely on the Southern Transportation Corridor, will be brought into the SCT fold as it is “implemented progressively”.

KRA also expects to deploy officers to other EAC countries to verify that the intra-regional exports meet rule of origin standards.

However, there may be logistic challenges in launching the SCT at Mombasa, with sources indicating that the offices to house customs officials from other EAC countries are still undergoing renovations.

“Part of that (renovations) is ICT networking to link the region’s countries so as to facilitate the single customs territory,” said a port official who requested anonymity since he is not authorised to speak to the press.

In November, the Summit gave customs authorities until June 2014 to ensure “that all operational requirements [are] finalised”.

Industry players who spoke to the Daily Nation said that the plan is expected to significantly cut transport costs and travel time.

Under the prevailing system, a trader moving goods to Kigali, Rwanda, via the Northern Corridor has to deal with customs officials at three different points of entry — at Mombasa, the Kenya-Uganda border as well as at the Uganda-Rwanda border.

“Single handling of customs at the port of entry will make business between borders much cheaper,” said Mr Gilbert Langat, chairman of the Kenya Shippers’ Council.

Mr Langat estimates that once the SCT is in place, costs of moving goods across borders within the region could fall by between 15 per cent and 30 per cent.

However, he warns that further reduction in transport costs will have to be addressed through other non-tariff barriers in the region.

The Customs Union Protocol, which made provision for the SCT, was launched in 2005.

However, plans to operationalise the territory have, in the intervening years, amounted to naught.

A push by Kenya, Uganda and Rwanda, under the Coalition of the Willing (CoW) grouping, to eliminate non-tariff barriers in the region renewed momentum for the establishment of the SCT.

The CoW has also directed the elimination of most weighbridges in the region beginning tomorrow.

A notice published by the Uganda National Roads Authority in The East African newspaper outlines new guidelines to ensure goods crossing into the country from Kenya, Tanzania, South Sudan, Rwanda and the Democratic Republic of Congo (DRC) are weighed only once.

“Transit trucks conveying cargo bearing customs seal and already weighed as outlined above will show the weighbridge ticket at subsequent weighbridges to be exempted from weighing,” reads the notice in part.

From January 1, 2014 Kenya, Uganda and Rwanda are also expected to begin issuing single tourist visas in line with directives from their presidents.