8 arrested for stealing a 60-foot-long bridge in India - MyJoyOnline.com

8 arrested for stealing a 60-foot-long bridge in India 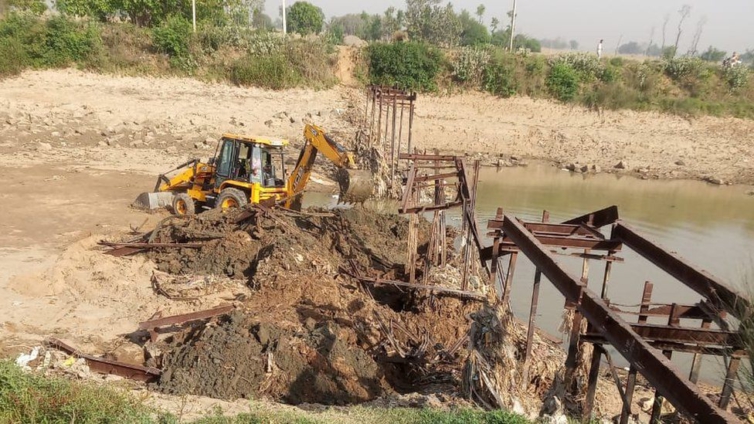 Police in the Indian state of Bihar have arrested eight men for stealing a bridge to sell it as scrap.

The BBC’s Geeta Pandey in Delhi spoke to the police, local reporters, and villagers to piece together the story of the theft.

How do you steal a bridge?

One morning last week, when four or five men – including some from the state government’s Irrigation Department – turned up in Amiyavar village, near the city of Sasaram, with an earth excavator and gas cutting torches, local villagers were happy. They thought the government had finally begun work on their request to remove an old, disused bridge.

For three days, the men would arrive at the site at 7am and work until dusk, chipping away at the remains of the bridge, cutting the iron with gas torches and using excavators to loosen the earth.

The metal was then transported in a hired van and deposited at the warehouse of a local scrap dealer.

“No-one suspected it was a heist,” local journalist Jitendra Singh, who lives just “200 metres from the bridge”, told the BBC.

“I go for a morning walk every day and last week I saw the men at work. Everyone else in the village saw them too,” he added.

The dismantling was allegedly supervised by Arvind Kumar, a part-time Irrigation Department worker, who told anyone who asked that “the work had official sanction”.

He’s among the eight people who’ve since been arrested, senior police official Ashish Bharti – who is heading the investigation – told the BBC.

“Irrigation Department official Radhe Shyam Singh, the van owner and the owner of the scrapyard are also among those arrested. We are looking for at least four more people,” Mr Bharti said.

Some 60ft (18m) long and 12ft high, the iron bridge on the Ara canal was built in 1976 and had not been in use since the early 2000s after a concrete bridge was built nearby.

It was in a serious state of disrepair, said villager Shailendra Singh.

“Over the years, all the wood used in the bridge had disintegrated and the iron had rusted. Thieves had stolen bits and pieces of the metal to put to other use or sell as scrap for a few rupees. But what happened last week was daylight robbery,” he said.

Jitendra Singh said that just days before the theft, the village head had sent a written petition to the authorities to dismantle the bridge because it had become a health hazard.

On numerous occasions, he says, he had seen the bodies of cattle, and even humans, float in from upstream and get stuck under the bridge.

“The stench would be unbearable,” he said.

How were the thieves caught?

Pawan Kumar, who lives in a neighbouring village, heard on 5 April – the third and the final day of the dismantling exercise – that the rusty old iron bridge had been removed.

“I tried calling Irrigation Department official Radhe Shyam Singh, but when he didn’t answer, I called a senior official to ask why they had not followed procedure: the authorities are expected to issue a tender and the work is given to the lowest bidder,” he said.

The official told him that he had not issued any order and was unaware that the bridge had been taken down.

A complaint was then lodged with the police, who launched an investigation and carried out raids.

“We have seized a JCB machine [earth excavator], gas cutting torches and cylinders, a pick-up van and 247kg of metal,” Mr Bharti said.

Why do thieves steal metal?

In many parts of India, thieves regularly steal water pipes and sell them to illegal factories which make small, crude guns.

Thieves also regularly run off with manhole covers; even toilet mugs on trains are not spared.

A few years ago, when Indian Railways announced a plan to upgrade its toilets, officials said they would continue to secure the metal mugs with a chain to prevent theft.

But these metal thefts aren’t just an Indian problem – it’s common in the US, the UK and many parts of Europe too.

In Britain, theft of power and signalling cables, overhead line equipment and clips used to hold rails in place have resulted in thousands of hours of delays annually.

And according to Europol, the European Union Agency for Law Enforcement Cooperation, metal theft causes devastating loss to industry and local businesses, and major disruption to essential public services, across Europe.

Bridges are stolen elsewhere too

In the US, thieves in a small western Pennsylvania town stole a 50ft steel bridge in October 2011.

Two years ago, metal thieves in Russia’s Arctic region of Murmansk made off with a metal structure, 75ft long and weighing 56 tonnes, from a disused railway bridge.

And in 2012, metal thieves in the Czech Republic used forged documents to steal a pedestrian bridge, claiming they were removing it to make way for a new cycle route.