‘Above all else, do not lie’ – Chimamanda Adichie

“My name is Chimamanda,” said author Chimamanda Ngozi Adichie at Class Day this afternoon, in her soft West African lilt. “In Igbo, it means ‘My personal spirit will never be broken.’ I’m not sure why, but some people find it difficult to pronounce.” She recalled a woman who was to introduce her at an event in London, who spelled the name out for herself phonetically and rehearsed it again and again.

“I could tell she was very eager to get it right. And then she went out to the stage, and gave a lovely introduction, and ended with the words, ‘Ladies and gentlemen, please welcome Chimichanga!’” “I told the story at a dinner party,” she continued, “and one of the guests seemed very annoyed that I was laughing about it. ‘That was so insulting,’ he said. ‘That English woman could have tried harder.’”

“But the truth is, she did try very hard,” Adichie said. “In fact, she ended up calling me a fried burrito because she had tried very hard, and ended up with an utterly human mistake that was the result of anxiety. The point of this story is that intent matters. That context matters…We now live in a culture of ‘calling out,’ a culture of outrage. And you should call people out; you should be outraged. But always remember context, and never disregard intent.”

She then quickly pivoted to the main theme of her speech: “If I were asked the title of my address to you today, I would say, ‘Above all else, do not lie.’ Or ‘don’t lie too often’—which is really to say, ‘Tell the truth.’ But lying, the word, the idea, the act, has such political potency in America today, that it somehow feels more apt…Today, the political discourse in America includes questions that are straight from the land of the absurd. Questions such as, ‘Should we call a lie a lie? When is a lie a lie?’

“The biggest regrets of my life are those times when I did not have the courage to tell the truth,” she continued. “There is nothing more beautiful than to wake up every day holding in your hand the full measure of your integrity.” With men’s-rights figures like Jordan Peterson, a former assistant professor of psychology at Harvard, building their platforms around a superficially similar message (“Don’t tell lies”), Adichie’s version felt like a tonic. She went on to tell a story about meeting a famous writer whose work she had not read. “I shook his hand and told him what a fan I was. ‘I love your work!’ I said. His wife was sitting next to him. ‘So, which of his books have you read?’ she asked, and I froze.

“Before I fled,” Adichie said, “I heard the writer say to his wife, ‘Honey, you shouldn’t have done that.’ But the truth is that I shouldn’t have done that. To read a novel is to give honour to art. Why lie about giving honour to something to which you have not? I was of course completely mortified that day, but I have come to respect what that writer’s wife had: a fantastic bullshit detector….If you don’t have it now, work on it. But having that detector means you must also use it on yourself. And sometimes the hardest truths are those we have to tell ourselves.”

To help them err on the side of truth, she urged students to “make literature your religion, which is to say read widely: narrative, fiction, nonfiction—make the human story the centre of your understanding of the world.”

“You, Harvard class of 2018, are not unfamiliar with speaking the truth,” she continued. “When you stood alongside dining-hall workers during the strike, when you protested the end of DACA when you supported the Black Lives Matter movement, you were speaking the truth…I know it is terribly clichéd to say you must use this power [as Harvard graduates] to change the world. But really, you must use this power to change the world.”

Adichie closed with an Igbo proverb: “Mgbe onye tete bu ututu ya—‘Whenever you wake up, that is your morning.’ Tell the truth—I wish you courage, and I wish you well.”

Adichie’s remarks resonated in particular alongside those of Jin Park ’18, this year’s Harvard orator, an undocumented student whose parents are Korean immigrants working in restaurants and nail salons in New York. All Harvard students, Park said to his classmates, ask themselves, “What am I going to do with my talents?” 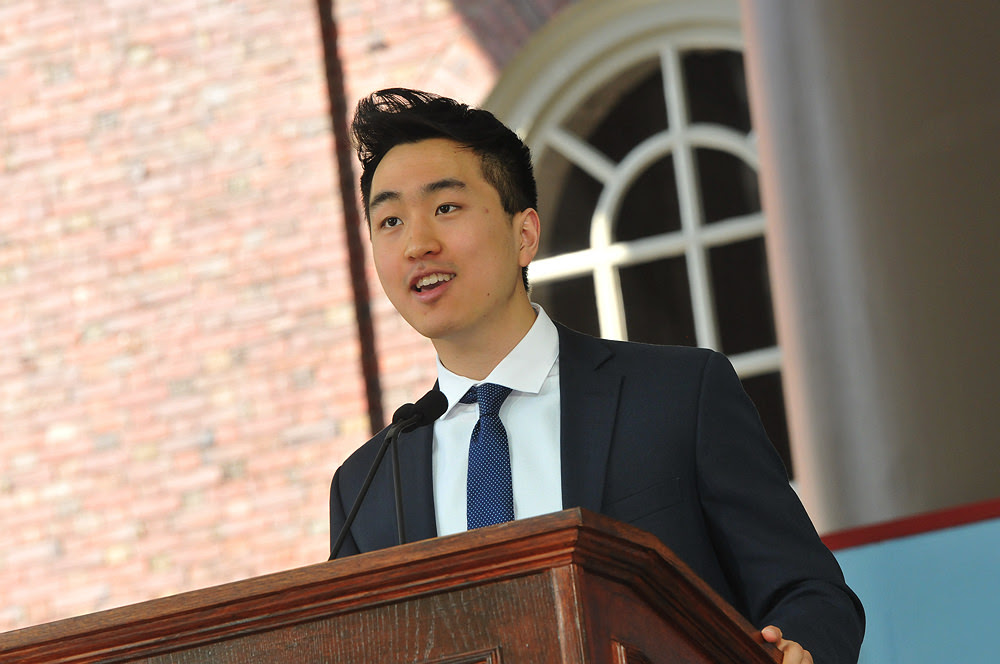 “My immigration status has always affected the way that I see the world, the way I envision my place in society, and by extension, what I wanted to do with my so-called talents,” he continued. “I found the answer buried in the personal library of John Rawls, a famous political philosopher at Harvard…Rawls tells us that there’s a sense in which this question we all ask, ‘What am I going to do with my talents?’ has hidden within it a false premise…Rawls challenges us to question whether our talents are something we can truly claim ownership over. He says that one’s talents are merely the product of luck, an arbitrary force dispensed to humans based on no moral standard. Thus, he argued, we must think about our talents as a collective asset—a common asset that must be leveraged as part of a well-regulated political union.

“Our particular positions within the web of society come to us most of all through fortune, not desert,” Park argued. That understanding, he said, requires students to ask of themselves a slightly different question: “What am I going to do for others with my talents?”