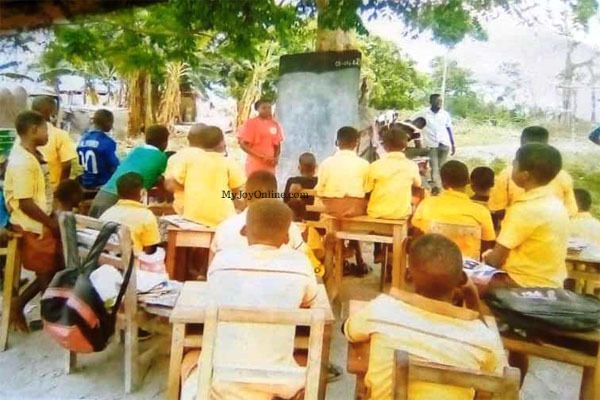 Teaching and learning at Bepotirim Municipal Assembly (MA) Basic School in the Wenchi Municipality of the Bono Region is under serious threat as the school conduct lessons under trees.

Temporal structures housing the Kindergarten (KG) and primary school children collapsed on May 24, 2020, compelling the school authorities to adopt the unconventional means of teaching and learning since then.

JoyNews’ visited to the school reports that pupils in and around Bepotirim community have been feeling reluctant to attend school due to the dilapidated nature of their school building.

A class six pupil, Emmanuel Ansah, stated that academic work has always been destructed either by the scorching sun or rain.

“The current state of our school building has become a major source of worry for our parents and teachers. For us, the little ones, we are constantly agitated since we are unsure when the next round of rainfall will begin, so we are unable to concentrate on studies,” he explained.

Another serious challenge confronting the school with a population of 288 is the lack of classroom furniture for both the pupils and teachers.

A few classrooms have limited desks for the pupils and those who do not always have to lay on their bellies to write during lesson hours.

Headmaster of the school in consultation with the School Management Committee (SMC) and the Parents and Teachers Association (PTA) is appealing to the government, NGOs as well as individual philanthropists to aid them in constructing a complete 9-unit decent classroom block to house both the KG and primary sections.

However, JoyNews intercepted a letter signed by the school’s Headmaster and addressed to the Wenchi Municipal Director of Ghana Education Service (GES), asking for assistance to construct a six-unit classroom block.

JoyNews has made unsuccessful attempts to get assembly members for Tromeso Electoral Area under which the school falls to comment on the issue.