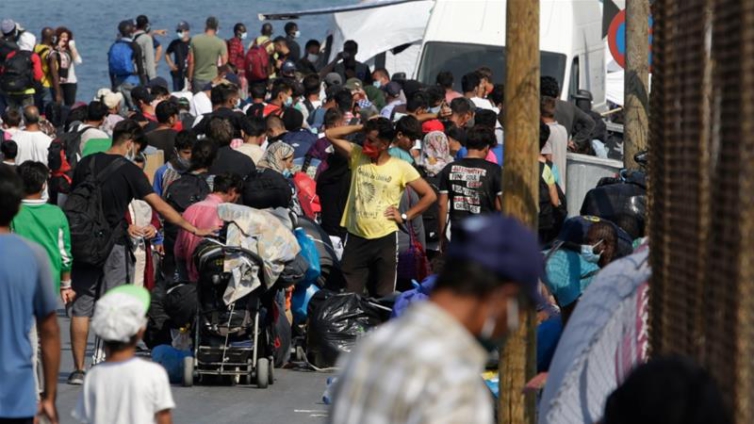 Refugees and migrants from the destroyed Moria camp line up to enter a new temporary camp during a police operation, on the island of Lesbos, Greece [Elias Marcou/Reuters]

Refugees and migrants on the Greek island of Lesbos, having escaped the fire that engulfed Moria, have told Al Jazeera that living conditions inside a new camp are squalid and uninhabitable, just one day after their arrival.

“There is no water, no toilet, no food,” 24-year-old Zaynab, an Afghan woman, told Al Jazeera by phone. “The smell is very bad because people go to the toilet on the floor in front of my tent.”

On Thursday, police launched an operation to rehouse thousands of asylum seekers who had been sleeping rough in supermarket car parks and roadsides, a week after a massive fire tore through their shelters in Moria, a sprawling unsanitary site originally designed with a capacity of 3,000, where 13,000 had lived.

The new Kara Tepe camp, near the island’s main town Mytilene, was made on a former military firing range and is close to the remains of the Moria site.

As of Friday, capacity at Kara Tepe had been expanded to 12,000 according to the Greek government, with 6,180 new residents. But many remain wary of the new accommodation.

Since her arrival, Zaynab has been staying inside her tent, too afraid to step outside amid heightened tensions.

Many refugees are angry and view the new shelter as a continuation of the notoriously neglected Moria camp.

“They gave me one piece of meat and one bottle of water,” said Zaynab on Friday, who has not eaten since Thursday afternoon.

The flimsy privacy of a tent could not offer the young woman respite from a week of sleeping rough.

“The tents are very near to each other and at night, people were fighting until 1am.”

Zaynab suffers from migraines and insomnia but has been unable to take her medication.

“I asked an [aid] organisation to bring my medication but they said the police are not allowing them.”

Tensions have been compounded by a two-week quarantine enforced by the Greek government, with some refugees fearing their freedom of movement will be further stifled.

Like Zaynab, Mariam, a teenager, has not had access to running water since moving to Kara Tepe.

“We cannot live in here, we can just sleep,” she told Al Jazeera.

She is worried about the coming winter because her family tent has no wooden pallets to protect them from cold and rain.

Aid workers say the camp’s proximity to the sea could put refugees at further risk as icy winter winds set in.

Moussa 30, has taken to bathing in the sea, but says even that has become impossible because many people use the beach and the water as a toilet.

“If we continue this way, we will have another disease without corona[virus] … I am not going anywhere, I am inside my tent because I am afraid of corona.”

Astrid Castelein of the UN High Commissioner for Refugees told Al Jazeera: “For the moment it is an emergency site … but improved on a daily basis as much as possible.”

But conditions in the new camp fall short of minimum standards of dignified living under Greek and international law, according to Refugee Support Aegean (RSA), a local nonprofit.

“They are only given two bottles of water both for drinking and washing and many of them say they are washing themselves in the sea,” said Asterios Kanavos, a lawyer at RSA.

“They have no mattresses and their tents are very hot due to the weather because they are not protected from the sun.”

Authorities have temporarily blocked lawyers from accessing their clients inside the camp, citing health concerns.

Meanwhile, the UNHCR says it is working to provide Kara Tepe residents with chemical toilets, showers and hand-washing facilities, while NGOs and the Greek government are setting up water supply systems and drainage.

“The priority is that everyone enters by today, at the latest tomorrow, also because of tensions with the local population,” said UNHCR’s Castelein.

A stone’s throw away, in the town of Moria, locals welcomed the move.

“We want them to be collected somewhere for their safety and ours,” said Moria resident Nevrakis Konstantinos.

By Sunday, Kara Tepe is expected to hold all 12,000 displaced refugees and migrants. Greek authorities this week said all asylum seekers should be able to leave the island by Easter next year.

DISCLAIMER: The Views, Comments, Opinions, Contributions and Statements made by Readers and Contributors on this platform do not necessarily represent the views or policy of Multimedia Group Limited.
Tags:
Greek
Lesbos camp
Moria fire
refugees