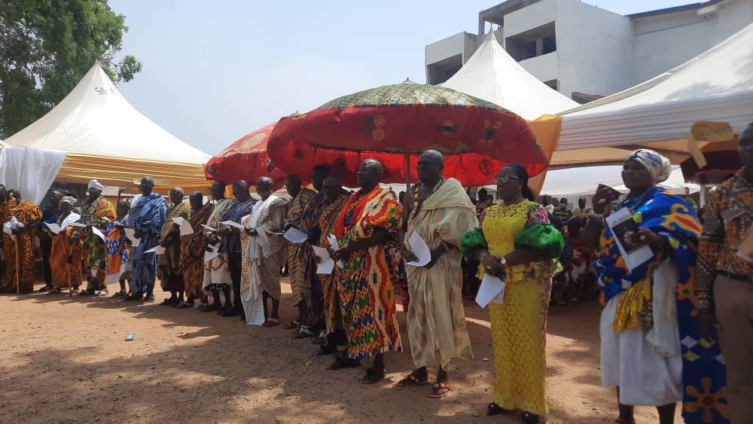 A 24-member Council of Elders for the Agave Traditional Council has been inaugurated at Dabala in the South Tongu District of the Volta Region.

The Council, made of Chiefs, Queen mothers as well as statesmen would serve as an advisory council to the new Agave Paramountcy.

Rev. John Kokloku of the Global Evangelical Church, Dabala, administered the oath of allegiance and secrecy to the Council Members.

The Agave State Secretary, Charles Amenyo, who spoke on behalf of the Council Members expressed gratitude to the Paramountcy for the honour done them.

On his part, Awomefia of Agave State, Togbe Xedihor Hlitabo IV, charged the council to discharge their duties in a transparent manner for the development of the Agave State and its citizens.

He stated that communal unrest was an obstacle to development and for that matter Agave could not afford to sacrifice development for chieftaincy disputes.

He noted that under his reign, the traditional area has enjoyed maximum peace as he was very instrumental in working with the people of the area and all other relevant institutions to bring development to his people.

The Divisional Chief of Ngleshie Amanfrom in the Greater Accra Region, Nii Kwashie Gborbilor IV, was the Special Guest of Honor.

He stressed on the need for the Council to become the backbone of the Paramountcy in all its spheres and endeavors as well as advised the members not to lord their position over the people, but listen to and serve them in all their dealings.

A member of the Council, Charles Amenyo, thanked the Agave Traditional Council for reposing the confidence in them.

DISCLAIMER: The Views, Comments, Opinions, Contributions and Statements made by Readers and Contributors on this platform do not necessarily represent the views or policy of Multimedia Group Limited.
Tags:
Agave Traditional Council
Dabala