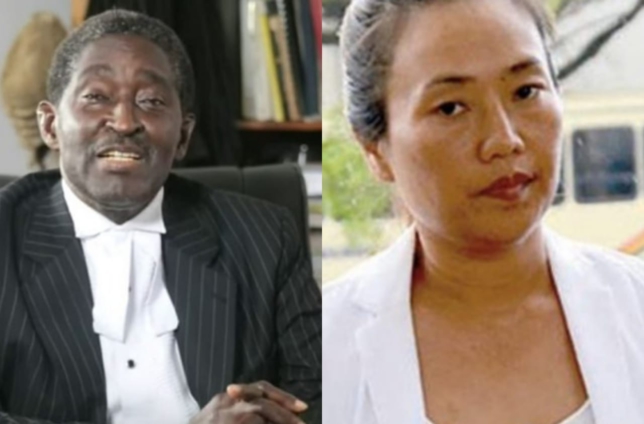 This was his response to a question posed by the lawyer for Aisha Huang, Nkrabeah Effah Dartey.

Supt. Essien is the Attorney General’s second witness in the trial in which Ms Huang is accused of engaging in illegal mining in the Ashanti Region.

Supt Essien on Monday, November 14 told the court his investigations into her activities revealed she had used a forged marriage certificate and passport to obtain a residence permit.

He also told the court the accused person gave investigators two statements. These statements were tendered into evidence.

Mr Dartey then asked whether the investigators had the assistance of an interpreter. Supt. Essien explained that was not necessary because she spoke Twi and English fluently.

Lawyer Dartey: When you were taking the statements, was there an interpreter or translator?

Supt Essien: No my lord. I will explain. When I was taking the statements there was no interpreter. Before that, I am the same person that delivered the invitation letter to the accused. And on the point of delivery, I had a one-on-one interaction with the accused and we spoke in English.

My lord, when she honoured the invitation, during the interview, we spoke in English and she responded in English and my lord she was very fluent in English. She even speaks fluent Twi.

So my lord, at the point we were taking the statement, she didn’t give us any indication that she needed an interpreter. And everything she understood before appending her signature.

Lawyer Dartey: Did you tell her that the statement she was making may be used in court?

Supt. Essien: My lord, I did not tell her the statement will be used in court. We invited her to ascertain her immigration status and also listen to her side of the story cornering the allegations made against her in the media publication concerning her illegal activities at Bepotenten in the Amansie Central.

She gave us a background of herself which are similar to both statements. With regard to her activities at the mining site, she gave us similar information. All were said by the accused in English. “

Aisha Huang through an Interpreter told the court she cannot read English and that she didn’t understand what was written in the statements.

Trial Judge Lydia Marfo, however, pointed out those are matters that will be dealt with by her lawyers.

She added that the issue did not bother her ability to read but what she told the investigators which was written.

Mr. Dartey then questioned the witness on why it took the state nearly three years to simply investigate and revoke her citizenship after detecting that she had used forged documents to obtain them. Supt Essien gave the following response

“It is true that it took the service three years. You will bear with me that depending on the level of the case, investigations can take an hour, days years or decades for crime to be detected

That notwithstanding the service was able to detect the crime. That is the most important thing.

However, the officer who undertook the investigations, at our Accra headquarters will come to this court and give further clarification on this matter”

DISCLAIMER: The Views, Comments, Opinions, Contributions and Statements made by Readers and Contributors on this platform do not necessarily represent the views or policy of Multimedia Group Limited.
Tags:
Aisha Huang
Galamsey kingpin
Nkrabea Effah Dartey