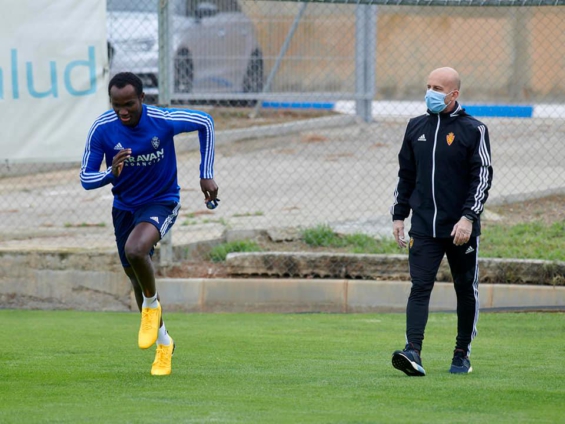 Ghana coach CK Akonnor has expressed his excitement by the return of Levante forward Raphael Dwamena to the pitch after a lengthy lay-off.

The striker resumed training on Saturday, seven months after being forced off by a heart condition. He went under the knife in January.

“I have been there before and it is not easy for a young player to go through what Raphael Dwamena went through,” Akonnor, who featured for German sides Wolfsburg, Fortuna Cologne and SpVgg Unterhaching during his playing days, posted on Twitter on Sunday.

“[I] had a chat with him and I’m happy to see him back in training.”

Dwamena has made nine league appearances and scored twice this season.

On loan at Spanish second-tier side Real Zaragoza, the 24-year-old showed unusually high heartbeat rates in games against Malaga and Cadiz in October, prompting further examinations and ultimately necessitating his time away from football action.

He joined The Whites last summer, a year after transferring from Swiss side FC Zurich to Levante.

In January 2017, Dwamena joined Zurich from Austria Lustenau after raking in 18 league goals for the Austrian club.

In his first season in Switzerland, he notched 12 goals in 18 matches to help FCZ secure top-flight promotion.

He continued his good form in the elite division as he registered nine goals in 32 games.

Dwamena, who scored twice on his international debut for Ghana last year, was once on the books of Austrian giants Red Bull Salzburg, featuring for feeder side Liefering.

He missed the Africa Cup of Nations (Afcon) in Egypt last year due to his health concern. The Nkawkaw-born player could be available for selection when Ghana return to action potentially in September. It will be his first time under Akonnor who assumed duty as Black Stars coach in January, having replaced James Kwasi Appiah.