Albania earthquake: Rescuers search into the night after deadly tremor

Rescuers are searching the rubble of buildings into the night in Albania, where a strong earthquake killed 20 people and injured 600 on Tuesday.

The 6.4 magnitude tremor struck 34km (21 miles) north-west of the capital, Tirana, as people slept in their beds during the early hours.

Most of the deaths occurred in the coastal city of Durres and the town of Thumane, close to the epicentre.

Tents have been set up for those left homeless by the disaster. 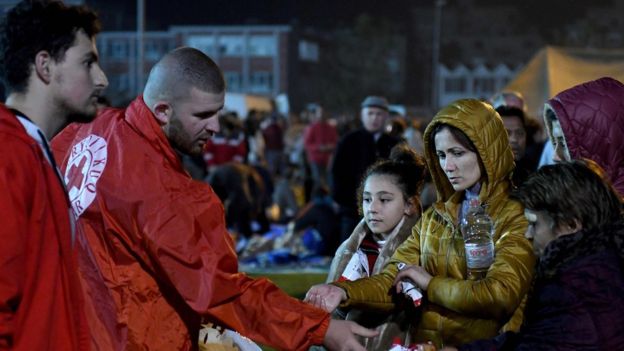 Image captionPeople are being housed in a stadium in Durres

Prime Minister Edi Rama promised that rescuers would “continue to search patiently and thoroughly to the end”.

The government has declared Wednesday a day of mourning.

The European Commission said it had deployed rescue teams from Italy, Greece and Romania to help with the search efforts, while teams were also sent from Kosovo and Montenegro.

Tuesday’s earthquake has been described by the authorities as the strongest to hit Albania in decades.

How bad was the quake?

Dulejman Kolaveri, a man in his 50s, said he feared his 70-year-old mother and six-year-old niece were trapped inside because they had lived on the top floor.

“I don’t know if they are dead or alive,” he told AFP news agency, his hands shaking. “I’m afraid of their fate. Only God knows.”

In Durres, a woman called Bukuri Morina and her family of 10 joined thousands of others to spend the night in tents at the soccer stadium. 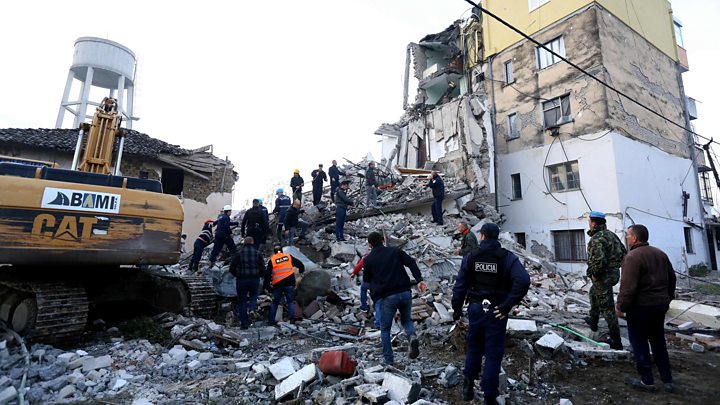 “We are afraid to go back to our apartment,” she told Reuters news agency.

“There are cracks all over and we are afraid that we will have the same destiny as people in Thumane.”

One man who died was caught in a car accident when the quake tore open parts of a road, AFP adds.

Another man died after jumping from a window in panic after the tremor struck.

Are earthquakes common in Albania?

The Balkans is in an area prone to seismic activity.