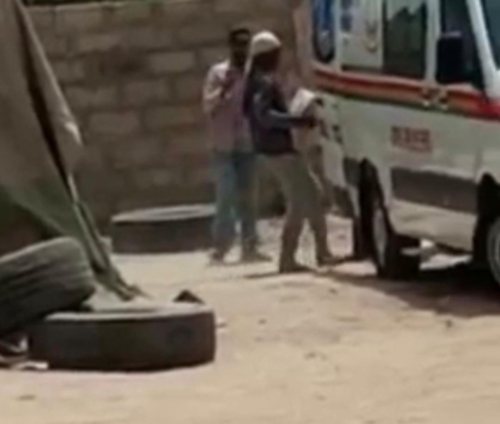 The National Ambulance Service (NAS) has disclosed that the ambulance seen in a video on social media being loaded with bags of cement is not part of its service fleet.

In a video sighted by Myjoyonline.com, Tuesday, two men presumed to be workers at a cement shop, were captured busily loading cement bags into an ambulance.

This act received a lot of backlash on social media with many criticising the relevant stakeholders in the country’s health sector over what they described as negligence.

The Service, however, in its press statement dated June 1, stated that the “said vehicle with registration number GV-537-20, was one of the Ambulances awaiting the fixing of minor faults by the supplier before being received and integrated into the National Ambulance Service fleet”.

According to NAS, preliminary investigations carried out reveal that the said ambulance was in the custody of its supplier, Service Ghana Autogroup Ltd for servicing.

“The said suppliers had caused the Ambulance to be sent to its garage to address a minor fault. The National Ambulance Service had earlier declined to take custody of the vehicle because of the said fault,” portions of the press statement read.

Head of Public Relation, Simmons Yussif Kewura, revealed that a mechanic of the garage Nana Ofosu, after the repairs, drove the ambulance towards the Mallam-Kasoa-Winneba Road on a test drive, during which he employed the vehicle for his private purposes.

The National Ambulance Service, therefore, denies claims of engaging in unethical conduct as the said ambulance is in the possession of the Service Ghana Autogroup Ltd and not its outfit.