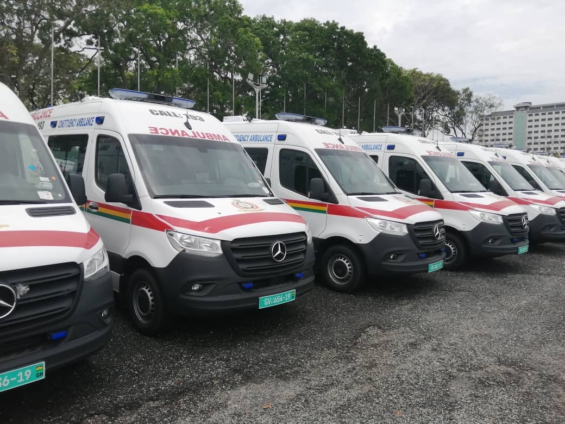 A fleet of ambulances belonging to the Ghana Ambulance Service

Chief Executive of the National Ambulance Service (NAS) has admitted that officers demanded GH₵600 from the husband of a pregnant woman before agreeing to transport the patient.

Prof Ahmed Nuhu Zakaria, who took his turn before the ad-hoc committee constituted by Parliament to investigate the incident, justified the charge of GH₵600.

He noted that although their services are supposed to be free, resource constraints have led them to charge patrons to cater for fuel.

“Because it was around the festivities, we were told they had exhausted their fuel. A communication went to the hospital that they didn’t have enough fuel, therefore they will need GH₵600 support of fuel.

“According to the crew, they were assured that they could move because the hospital was going to arrange either directly or indirectly with the family of the patient to get the fuel support. So the impression was that the husband of the patient was going to provide that support,” he said on Monday.

He further added, “so they left the hospital with the understanding that they would pick the husband who was going to provide the fuel support. They arrived at the point of picking up the patient’s husband and they discovered that he didn’t have the money for fuel.”

This development, the CEO explained caused the delay.

Meanwhile, the bipartisan committee constituted by Parliament to investigate the case has attributed the death of Augustina Awortwe, the pregnant woman, to the negligence of the National Ambulance Service crew.

The six-member Committee is chaired by MP for Effiduase-Asokore, Dr Ayew Afriyie. It was formed after a debate on a private members motion filed by three members of the Minority.

The husband of the deceased, John Obiri Yeboah who was called as the first witness claimed that officials of NAS demanded some amount of money before they would transport his wife to seek medical attention.

Mr. Yeboah claimed the delay was occasioned by his inability to pay an amount of GH¢600 demanded as cost of fuel for the trip.

“I gave GH¢50 demanded of me to the ambulance driver to buy fuel, and after they bought the fuel, one of the officials told me we had to return to Fijai. When we got to Fijai there was an altercation between the officials and the hospital and all along my wife was helpless in the hospital.

“It was while we stood at the Cape Coast hospital entrance that one of the men came to tell me I have lost my wife,” he told the media in January this year.

However, Prof Zakaria insisted that ambulances are fueled mainly for road traffic accidents but when it comes to inter-hospital transfers, an amount is requested as “fuel support”.

The 30-year-old nursing mother, Augustina Awortwe, lost her life in January due to delay on the part of the ambulance crew transporting her to Accra.

The doctors referred her from the Holy Child Clinic at Fijai, to the Korle-Bu Teaching Hospital for further treatment. Following her death, Parliament constituted a committee to probe the death. The Committee was given up to five weeks to conduct investigation into the incident and submit its report to the House.

DISCLAIMER: The Views, Comments, Opinions, Contributions and Statements made by Readers and Contributors on this platform do not necessarily represent the views or policy of Multimedia Group Limited.
Tags:
National Ambulance Service
Parliament's Committee
Professor Ahmed Nuhu Zakaria