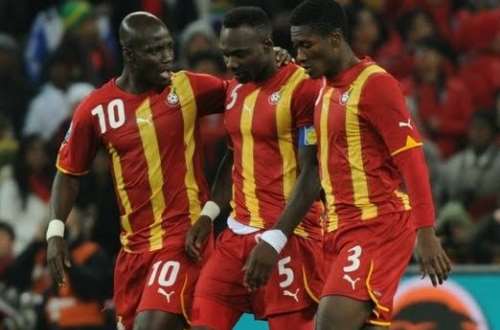 He pointed to Appiah’s charisma and the love he earned from Ghanaians as the qualities that allowed him to effectively play his role as captain.

“I think he is someone who had the charisma, the love of Ghana and was also marvelous on the field. This allowed him to control everything that was happening in the squad”.

He also described ‘Tornado’ as a natural leader and said he picked pointers when they played together.

The first time I came into the Black Stars he was the leader and I really watched him and took a lot from him because he had that thing [leadership qualities] he did not learn, it’s a gift by God. That’s why he was able to achieve all that he achieved”

John Mensah-Leader by example
Ayew described John Mensah as a captain who led by example.

He said ‘The Rock of Gibralter’ didn’t say much in the dressing room but was more vocal on the field.

“He wasn’t a big talker but he had the respect of everyone mainly because e performed on the picth. I don’t remember him having a bad game in a Black Stars jersey.”

“He didn’t speak much. He was always in his corner but he spoke on the pitch and his performance will make you understand what he was telling you.”

Asamoah Gyan-Jovial
Ayew described Gyan as jovial and leader who created a relaxed atmosphere with fun and humour. Asamoah Gyan took over as skipper of the Black Stars after John Mensah and was noted for leading the pre-match singing.

“He was jovial and more into the laughter side of things with the players. He had that ability to interact with any player due to the way he conducted himself. “

He touched on Gyan’s goalscoring records- Black Stars top scorer, Highest scoring African at the world cup- and said he was the team’s go-to man for goals.