Ansu Fati out for four months after knee surgery 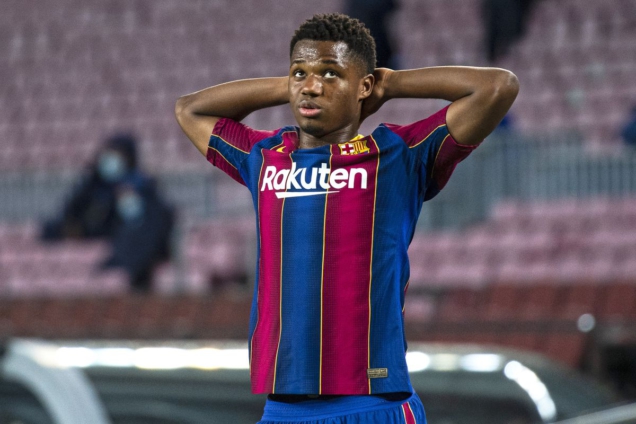 Barcelona have confirmed Ansu Fati will be out for the next four months following knee surgery.

The 18-year-old was injured during Barca’s 5-2 win over Real Betis on Saturday, rupturing the internal meniscus in his left knee.

A Barcelona statement read: “The first team player Ansu Fati has been operated on successfully by Dr Ramon Cugat for the injury to the internal meniscus of his left knee under the supervision of the Club’s medical staff. The player will be out for approximately four months.”

HUGE BLOW FOR BARCA AND THEIR RECORD-BREAKER

With 10 appearances and five goals so far this season, Ansu had already made the step up in terms of his role for Barca this year, so of course, the injury will be a bitter blow for both player and club in terms of his development.

Barca’s youngest ever league goalscorer also became Spain’s youngest scorer back in September, but so long as his absence remains at four months then the forward will have a chance to make his country’s squad for the European Championships next summer.

Ansu, Lionel Messi, and Antoine Griezmann have all started six league matches and come off the bench once, but Koeman will have to reshuffle the pack in light of this latest news.

Dembele is the obvious choice, having made three Liga starts and two further sub appearances, but 20-year-old Francisco Trincão will also get further chances to impress given he has come off the bench seven times in the league already.