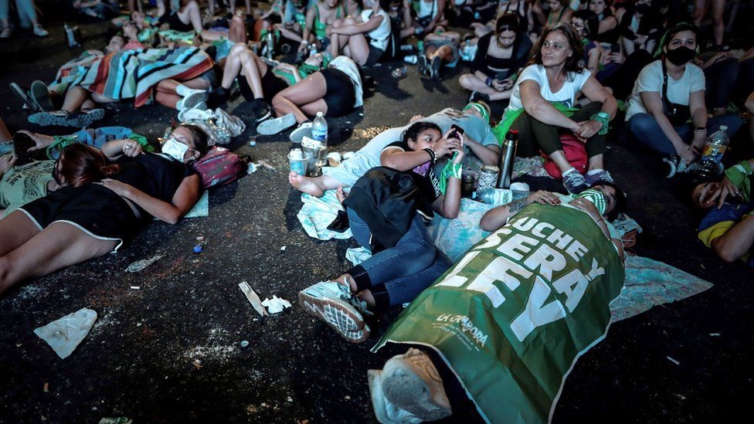 Politicians in Argentina have voted yes to a bill that brings the largely Catholic country one step closer to legalising abortion, a change long-sought by women’s rights activists.

Parliament’s lower house voted in favour of the proposed law by 131-117.

Before becoming law, the bill must also pass the upper house, the Senate. The vote is expected before the end of the year.

Many women in Argentina who have an abortion can face prosecution.

Politicians in Argentina vote yes to a bill that brings the largely Catholic country one step closer to legalising abortion https://t.co/253rAnpvmF

President Alberto Fernández proposed the bill which would permit abortions to be carried out up to the 14th week of pregnancy.

Currently abortion is only permitted in case of rape or if the mother’s health is at risk from pregnancy.

The lower house passed the bill after debating for 20 hours on Thursday into Friday morning.

The vote in the Senate is expected to be even tighter – in 2018 the body rejected a similar bill to legalise abortion after the lower house voted in favour.

On Thursday the Roman Catholic Church repeated its opposition to abortion, asking politicians in Argentina for “a second of reflection on what respect for life means”.

By contrast, the Women, Gender and Diversity minister Elizabeth Gómez Alcorta tweeted after the vote: “We have written a new chapter in our history.”

Groups for and against the bill gathered outside the congress building in the capital Buenos Aires.

Protesters who have campaigned for the change wore green, the colour of their movement. Many cheered and cried when the results of the vote were announced, according to AP news agency.

Others responded with disappointment. “They don’t want to show what an abortion is. This is it,” one protester against the bill holding a cross and a doll of a foetus with blood on it told Reuters news agency.

About 38,000 women a year require hospital treatment because of dangerous abortion procedures performed in secret, according to the Argentine government.

Thousands are estimated to have died after unsafe abortion since 1983.