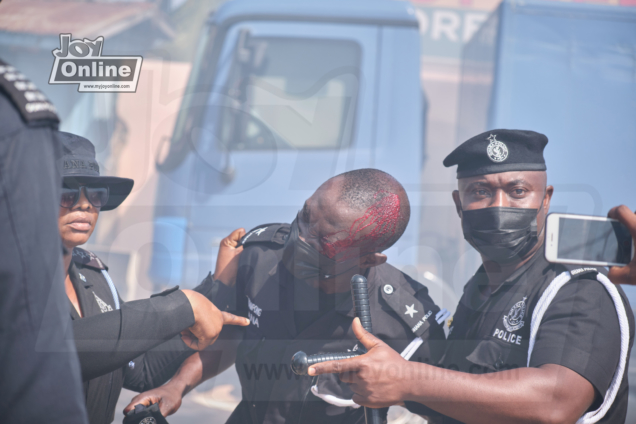 The Police Administration has announced that two of its personnel are currently undergoing surgery as a result of the violence that marred Tuesday’s demonstration by Arise Ghana.

The police in a Facebook post on Thursday said the number of injured officers has increased from 12 to 15. The injured officers, according to the police, are undergoing treatment at the Police Hospital.

“The number of officers who were injured during the first day of the Arise Ghana demonstration increased from twelve (12) to fifteen (15). All the officers are being treated at the Police Hospital with two (2) undergoing emergency surgery,” the police said on Thursday.

The Service expressed gratitude to the Minister of Defence and Interior, Ambrose Dery for visiting the injured officers.

“We are grateful to our sector Minister, Hon. Ambrose Dery, Minister for the Interior, for leading a team to visit the officers at the hospital. The Police Administration wishes to express its appreciation to members of the public for their show of love and support for the affected officers.”

The Police had earlier announced on Tuesday that 12 of its officers sustained various injuries from the Arise Ghana demonstration.

According to the Service, the injuries were sustained due to attacks from the protesters on Tuesday.

“Unfortunately, all without any provocation, the demonstrators began pelting the police with stones,” parts of the release stated.

The police, in a statement signed by the Director of Public Affairs, Grace Ansah-Akrofi, noted that “so far, 12 officers who sustained various degrees and were treated in the Police Mobile Hospitals have been transferred to the Police Hospital for further treatment.”