Arrested Menzgold customers to appear in court next week - MyJoyOnline.com

Arrested Menzgold customers to appear in court next week 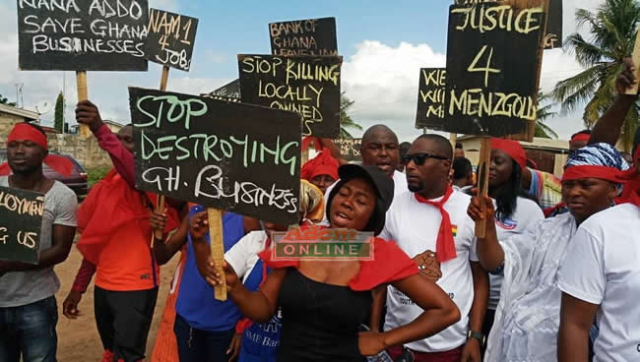 The more than ninety customers of Menzgold, who were arrested on Wednesday January 8 during a march to the home of Nana Appiah Mensah, also known as NAM 1, at the Trassaco Valley, have been granted bail and are being processed for court.

The Police arrested them when they marched to the home of Nana Appiah Mensah in demand of their investments.

The Deputy Superintendent of Police (DSP) Afia Tenge, Public Relations Officer of the Greater Accra Regional Police Command, told the Ghana News Agency that the docket of the aggrieved customers were being worked on by the Prosecution Unit of the Regional Headquarters, Accra, for them to appear in court.

She said the process was quite slow due to the number of statements they had to process and was sure that by early next week all would be set for court.

Mr Fred Forson, Spokesperson of the Coalition of Aggrieved Menzegold Customers, told the GNA that he, with two other executives; Timothy Binab, Chairperson, and Issac Nyarko, Vice Chairperson, who stood as sureties for the bail of their members, reported to the station in the morning in fulfilment of the bail conditions.

He said the sureties were instructed to report to the station on Tuesday, January 14, together with all the customers on bail.