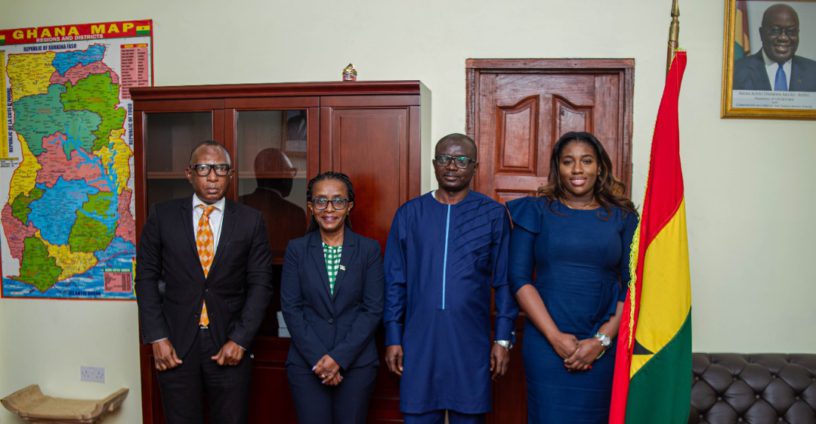 The Barbados High Commissioner to Ghana, Juliette Babb-Riley has paid a courtesy call on the Minister of Chieftaincy and Religious Affairs, Ebenezer Kojo Kum to deepen bilateral relations between the two countries.

The meeting was also to discuss ways in fostering a healthy relationship between religious groups in Barbados and Ghana.

Interacting with the Minister on Wednesday, Madam Juliette, said Barbados shared a common history with Ghana, both in terms of lineage and religious values.

She said while many Barbadians traced their lineage to Ghana, the country was also predominantly Christians, just like Ghana.

The High Commissioner said though the two countries had collaborated over the years, including at the United Nations level, it was still important that such co-operations were tightened for mutual benefits.

“We recognise that a number of the practices and traditions are linked to Ghana, and we share a common history, our population majority is Christians but we do have a Muslim community as well and so we are looking to collaborate between the various Muslim communities in Barbados and Ghana and discuss ways to bring our two people together,” she said.

Barbados and Ghana established formal diplomatic relations in 1994, with the two countries have enjoyed friendly interactions over the past 27 years.

In September this year, the Barbadian government opened its first High Commission in Ghana as part of efforts to strengthen the bilateral relationship between the countries.

This follows a visit by President Akufo-Addo to Barbados in 2019, and a subsequent visit of the Prime Minister of Barbados, Mia Amor Mottley, to Ghana, the same year.

Madam Juliette said the visit formed part of the Embassy’s way of reaching out to Ministers and State agencies to create awareness about the commencement of operations of the High Commission, in Ghana.

The country was declared a republic in November 2021, ending Britain’s centuries of influence, including more than 200 years of slavery until 1834.

The Minister said there was a lot that both countries could collaborate on to benefit their people.

“We need to strengthen that kind of collaboration. We have a sense of bonding because of our historical background so we have a lot to collaborate on moving forward.

“I believe that this is a good beginning and as we move on, looking at other options, programmes and after beyond the return, there are still things we can do together,” Mr Kum said.