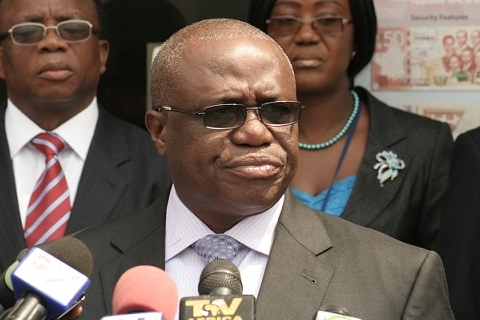 The central Bank will issue 800 million cedis ($237 million) of three-year bonds in the second half of 2014, with sales this month and October, it said in a circular on its website. There will be no sales of five- or seven-year debt, the longest duration the country offers in local-currency notes, according to the calendar. Foreign investors are only able to buy notes three years and longer.

The cedi has slumped 30 percent this year against the dollar, spurring inflation and eroding cedi assets. The value of oil, gold and cocoa exports dropped in the first five months of 2014 as the government spent 47 percent of revenue on salaries from 44 percent a year earlier. Bank of Ghana Governor Kofi Wampah raised the key lending rate on July 9 to a decade high of 19 percent.

“Because of the depreciation of the cedi, it will be very difficult for the market to invest in long-term issues, unless it will come at a very high cost,” Sampson Akligoh, an economist at Accra-based Databank, which has the country’s biggest mutual fund, said by phone today. “The strategies for issuing longer-term bonds depend on foreign investor appetite and how the pension funds will have an interest.”

In his budget for 2014, Finance Minister Seth Terkper said financing strategies to mitigate debt risk will include “lengthening the maturity profile of domestic debt through the issuance of longer-dated bonds.” He didn’t answer calls made to his mobile phone today. Deputy Finance Minister Cassiel Ato Forson was in a meeting and couldn’t immediately comment, said a woman who answered his phone and didn’t give her name.

Ghana canceled a five-year bond auction in March as yields on other maturities rose. An offer of seven-year debt was halted in May. Yields on the country’s benchmark 91-day Treasury bills climbed 487 basis points this year to 24.1 percent last week. The last sale of three-year debt, held April 14, saw yields jump 250 basis points to 25.48 percent.

Moody’s Investors Service cut Ghana’s credit rating one step to B2 on June 28, five levels below investment grade, citing a budget gap it estimated will exceed 10 percent of gross domestic product for a third year. The cedi fell 2.9 percent to 3.4101 by 1:57 p.m. in Accra.

“The deficit reduction strategy remains a bit unclear to the market,” Akligoh said. “The government would be aware that in the circumstances investors would be more committed to the shorter end of the market than the longer.”