British Steel on verge of administration

British Steel is on the verge of administration as it continues to lobby for government backing, sources say.

The UK’s second-biggest steel maker had been trying to secure £75m in financial support to help it to address “Brexit-related issues”.

The government said it would leave “no stone unturned” in its support for the steel industry.

British Steel’s main plant is at Scunthorpe, but it also has a site in Teesside.

Company sources said that the direction of talks with the government would become clearer in the coming hours.

Speaking in the House of Commons, Business Minister Andrew Stephenson said: “I can reassure the House that, subject to strict legal bounds, the government will leave no stone unturned in its support for the steel industry.”

UK Steel’s director general, Gareth Stace, said: “The statement from the business minister today provided a glimmer of hope for the Scunthorpe site.

“This does provide some breathing space for the company, its employees, and the wider steel sector, providing a potential route towards a stable and sustainable future.”

The request for emergency financial support from the government is understood to have been reduced from £75m to about £30m.

In April, British Steel borrowed £100m from the government to enable it to pay an EU carbon bill, so it could avoid a steep fine.

Reports have said that British Steel shareholder Greybull Capital and lenders have agreed to pump new money into the firm.

However, unless a deal is reached by Tuesday afternoon, the firm could go into administration within 48 hours. EY would be expected to be appointed as administrators on Wednesday.

If a company goes into administration, then the insolvency practitioners appointed to run the business will try to rescue it by selling it, or parts of it, as a going concern.

But if that is not possible it will be liquidated, meaning that it will be closed down and its saleable assets will be sold.

Tough decision for the government

Sources close to Greybull Capital say its lenders have told them that unless they can secure a £30m lifeline they will pull the plug on British Steel tomorrow.

The timing of this could hardly be worse for the government coming as it does right before the European elections.

Cynics might suggest that Greybull is not unhappy with the timescale of the plea.

The question may be whether the government can put this down to Brexit mitigation and tap the same source of contingency funds Chris Grayling disastrously used to procure emergency ferry capacity.

At least there would be an immediate dividend – to stave off the collapse of a firm that employs 4,500 people directly and has 20,000 more at risk in the supply chain.

However, having already lent £100m to cover a genuinely Brexit-related carbon emissions bill – further assistance to a private company struggling in a deeply challenged industry may be a precedent they would rather not set. 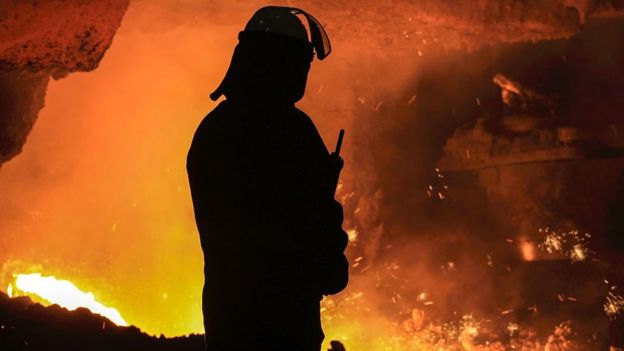 Last Thursday, British Steel said it had the backing of shareholders and lenders and that operations were continuing as usual while it sought a “permanent solution” from the government to its financial troubles.

It is understood that along with administration, nationalisation or a management buyout are being discussed as fall-back options for the company.

British Steel’s troubles have been linked to a slump in orders from European customers ‎due to uncertainty over the Brexit process.

The firm has also been struggling with the weakness of the pound since the EU referendum in June 2016 and the escalating trade US-China trade war.

One of its biggest customers is Network Rail, 95% of whose rails are supplied by British Steel’s Scunthorpe plant.

In 2007, India’s Tata conglomerate entered the UK steel market after it bought the Anglo Dutch group, Corus. In 2010, the business was renamed Tata Steel Europe.

Greybull’s rescue came during the depths of the steel crisis in 2016 and saved more than 4,000 jobs.

It then rebranded the company as British Steel and recently returned it to profit.

On Monday, the government, trade unions and employers signed a UK Steel Charter in Parliament. The charter calls on the government and large companies to buy British to boost UK industry.

The GMB union said it had written to British Steel on Tuesday demanding that the firm works with the government to save the Scunthorpe steelworks.

GMB national officer Ross Murdoch said: “Given this latest speculation, these are understandably extremely difficult times for our members.”

“GMB calls on the government and Greybull to redouble efforts to save this proud steelworks and the highly skilled jobs.”

The shadow minister for steel, Gill Furniss, called on the government to intervene, saying the UK steel industry was critical to the UK’s manufacturing base and strategically important to UK industry.

“Administration would be devastating for the thousands of workers and their families who rely on this key industry in a part of the country which has not had enough support and investment from government over decades,” she said.