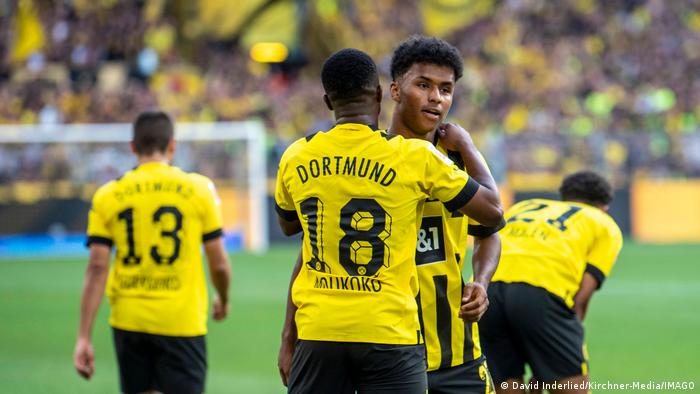 Expectations of Borussia Dortmund run high at the best of times. The emotionally charged Südtribüne still yearns for the rock’n’roll success of the Jürgen Klopp era, and the rest of Germany is desperate for someone, anyone, to challenge Bayern Munich.

Add to that a popular, new, homegrown head coach, five exciting summer signings, the Westfalenstadion full for the first home game of the season again for the first time in three years, and brilliant weather in the Ruhrgebiet, and the mood was positive as the Dortmund fan march snaked through the city’s streets in the sunshine.

However, by the time Marco Reus blazed a free-kick over the bar in the final minute of injury time, failing to test Edmond Tapsoba, the Bayer Leverkusen centre-back acting as an auxiliary goalkeeper after Lukas Hradecky’s red card, the mood among those in yellow was one of relief.

Dortmund had won 1-0. Just. But they had goalkeeper Gregor Kobel to thank for a series of point-blank saves to deny Patrik Schick, and the assistant referee whose flag disallowed two Leverkusen goals – correctly – for offside.

There had even been confusion over Borussia Dortmund’s own first-half goal. Did Karim Adeyemi’s shot cross the line before Reus scrambled it home? Through the melee of bodies in the box, stadium announcer Norbert Dickel gave it to Adeyemi, before correcting himself at half-time.

By which point Adeyemi had been forced off with a bruised toe, leaving Nico Schlotterbeck as the only new Dortmund signing this summer still on the pitch and not injured or ill. And even he had to have his shoulder rolled back into its socket in the second half.

It was not a straightforward day for Dortmund.

‘The start of the process’
And it won’t be a straightforward season, either. Saturday’s hard-fought win was a reminder that, despite the expectations, Borussia Dortmund once again find themselves transitioning into another new era, and there will be stumbling blocks along the way.

“We’re still at the start of the process,” head coach Edin Terzic told DW at full-time. “We know that no-one is going to gift us games in any competition. If, at the end of the day, an opposition team is better, then we’ll accept it. But what we won’t accept is opponents being hungrier than us or working harder. We remind the team of that every day in training.”

For once, Dortmund couldn’t be accused of not being up for the fight, matching Leverkusen for aggression, energy and – whisper it, mentality – throughout.

“We scratched and bit,” summed up sporting director Sebastian Kehl, also new in the job. “But if we hadn’t fought back like that, we wouldn’t have won the game. That’s what people want to see here. We deserved it, too, even though it was pretty even in the end.”

Bellingham’s maturity
Some more aesthetic elements did shine through, on occasion. Adeyemi looked set to be a handful down the right, at least before he got injured, and Jude Bellingham showed some characteristically neat touches in midfield.

The 19-year-old was appointed third-choice captain this summer, behind Reus and Mats Hummels, in recognition of his maturity and status.

“Jude came to us as a teenager and is slowly becoming a young adult, both physically and in terms of his character,” explained Terzic. “He wanted this responsibility, so we were happy to give it him. He’s been one of our most consistent players over the past couple of years, but he still needs to balance out his game and control his emotions. He’s working on that.”

Terzic praises Moukoko
Perhaps the most exorbitant expectations in Dortmund however have been of Youssoufa Moukoko, the subject of significant hype due to his goalscoring exploits at youth level. Still only 17, he led the line against Leverkusen, and played a key role in the build-up to the goal.

Leverkusen’s Jonathan Tah seemed to have won possession and taken the sting out of an attack, but Dortmund immediately kept up the pressure. Tah gave the ball away, Moukoko beat Tapsoba to the ball, turned and squared dangerously across the box, where Adeyemi and Reus did the rest.

It was Gegenpressingthat Klopp would have been proud of, and it earnt Moukoko praise from Terzic.

“Youssoufa has often been reduced to the number of goals he’s scored at a young age in youth football, and now everyone expects the same at senior level,” he told reporters. “But it’s not that simple. Today you saw how hard he works against the ball, and how he does important things for the team beyond just scoring goals.”

Realistic expectations
Whether on an individual basis or as part of the club as a whole, Terzic and his staff are tempering expectations in Dortmund.

The club lost an estimated €100m as a result of the pandemic, the appointment of Marco Rose didn’t work out, Erling Haaland has been sold, all five new signings have suffered physical setbacks in one form or another, and a new-look hierarchy and squad are picking up the pieces.

Sporting director Kehl revealed post-match that Dortmund had identified a short-term replacement for Sebastien Haller, who was recently diagnosed with cancer. Reports in Germany on Sunday morning suggesed the player in question is Cologne’s Anthony Modeste.

Given the rumors surrounding Edinson Cavani during the week, perhaps not the most inspiring or ambitious solution. But alongside the emotion and the euphoria, there is also a realism and an intense understanding of that in Dortmund if you look and listen closely enough.

“Borussia Dortmund once again finds itself at the start of a transition which will take time, and it would do the club and the fanbase good to keep expectations on a realistic level,” wrote the ultra group The Unity in their pre-match fanzine.

“In the Bundesliga, that means going into every game with heart and an absolute will to win – but also to accept that it still might not be enough to win the ultimate prize in the end.”

Borussia Dortmund’s collective heart was very much present on Saturday. But so, more importantly, were their heads.