Tom Heaton's saves frustrated his former club Manchester United as Burnley drew 0-0 at Old Trafford on Saturday to secure a first Premier League away point of the season.

Heaton dived to palm away a Jesse Lingard header and spread himself to block a powerful Zlatan Ibrahimovic volley against a United side who finished with 10 men as midfielder Ander Herrera was sent off.

United manager Jose Mourinho was sent to the stands at half-time for protesting too vehemently to the officials, having seen Matteo Darmian denied a penalty after being caught by Jon Flanagan's trailing leg.

The draw means that United have gone four Premier League matches without victory and have fallen eight points behind the leaders.

Wayne Rooney, back from a thigh injury, appeared as a substitute for the final 17 minutes, but could not inspire a victory, blasting over from Daley Blind's low free-kick deep into stoppage time.

He had already made a couple of straightforward stops from Ibrahimovic and Juan Mata when he raced off his line to block the former Sweden forward, who had latched onto a well-judged through pass from the Spaniard.

Burnley, whose defence included another United academy graduate in Michael Keane, were well organised as they frustrated the home side.

But they were indebted to Heaton as United started to find gaps in the later stages of the first half.

He dived to his right to push the ball aside after Mata had dug out a left-foot shot from the edge of the penalty area.

Heaton was grateful to see former Manchester City defender Ben Mee throw his head in the way of Ibrahimovic's shot after a lovely drag-back flick from Paul Pogba set up the chance.

But the England international was inspired as he palmed away a powerful Lingard header from Herrera's right-wing cross, before tipping over a 25-yard Pogba drive moments later.

Burnley lost left-back Stephen Ward to injury just before half-time and his replacement Flanagan escaped a strong penalty shout within two minutes of coming on. 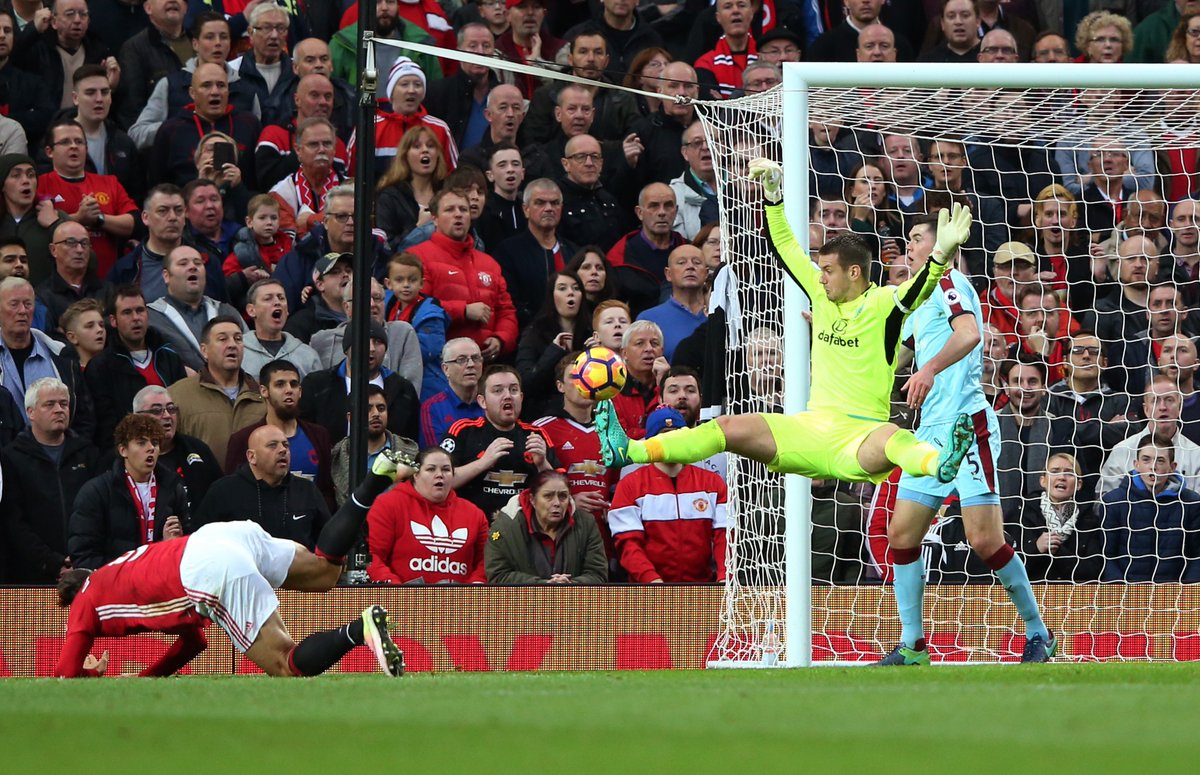 The Liverpool loanee seemed to clip Darmian's trailing leg right on the edge of the area, but referee Mark Clattenburg dismissed the home side's appeals.

Mourinho protested too strongly during the interval and began the second half in the Sir Bobby Charlton Stand. Having taken a seat near the front of the stand, the manager was then ordered to move further back.

As that drama unfolded off the pitch, United briefly lost their focus on it.

A Pogba error allowed Andre Gray a run at goal, although Luke Shaw managed to usher the striker into a wide position before making a challenge to snuff out the threat.

Scott Arfield then fired over with the visitors' best chance of the afternoon.

But United were soon pressing towards the Burnley goal once more.

Heaton stopped Mata's close-range shot from an Ibrahimovic cut-back, then got his body in the way bravely to block the Swede's thunderous volley.

When Mourinho's side beat the goalkeeper, they were still denied, as Mata hit the post with a clever shot on the turn and Ibrahimovic looped a header against the bar.

United then lost Herrera to a red card. The midfielder, booked for a first-half foul, was shown a second yellow card and sent off for a late challenge on Dean Marney.

Ashley Barnes, on as a substitute, had a chance late in the game to secure the visitors' first win at Old Trafford since 1962, glancing just wide from a Johan Berg Gudmundsson cross.
United finished on the attack, with Blind, Shaw and Ibrahimovic all going close, but the winning goal would not come.