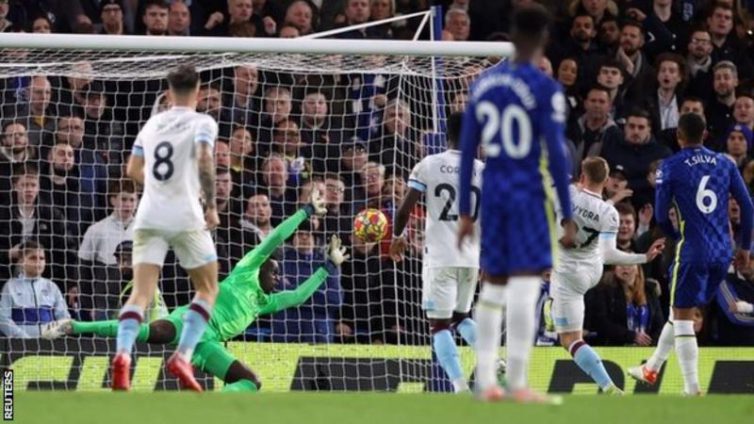 Matej Vydra's goal was his first for Burnley since April

Premier League leaders Chelsea would have won their game against Burnley 99 times out of 100, said boss Thomas Tuchel as they let the Clarets “steal a point by pure luck”.

Kai Havertz opened the scoring for Chelsea with a header from Reece James’ cross, only his second league goal this season.

The Blues could have scored a hatful with Thiago Silva’s header hitting the post, while Nick Pope saved well from Callum Hudson-Odoi in each half.

But Burnley levelled when Ashley Westwood whipped in a cross which Jay Rodriguez headed across to Vydra to stab home.

“That’s why everyone loves the game – a team can steal a point if the other team forgets to score the goals they deserve,” Tuchel.

“We played a fantastic match. Of course I’m disappointed.

“If we played this game 100 times, we’d win 99 times. Today we didn’t win it. The second goal would have decided it. It’s always possible you miss one ball, one cross, and this can happen.

“It’s our fault. We should have scored. We created so many chances.

“You have the opponent where you want to have them. You create so many chances. We let them believe it was possible to steal a point by pure luck and that’s what happened.”

Chelsea are three points clear of Manchester City at the top of the table, while Burnley remain in the relegation zone.

Chelsea’s run of four Premier League wins in a row – and seven consecutive victories in all competitions including penalty shootouts – comes to an end.

Tuchel’s side have coped well without the injured striker Romelu Lukaku in recent weeks, but they could have done with him here.

It was not looking that way when James whipped in a cross for Havertz to score. That is the seventh Premier League goal that right-back James has been involved in in six starts this season.

They ended with 25 shots – their most in a Premier League home game without winning since August 2015 – but only four on target.

The European champions had a host of chances in both halves – with headers from Andreas Christensen, Antonio Rudiger, Jorginho, Havertz and Silva all going close.

Ross Barkley, on his first league start for the club since 2019-20, was wayward with several shots.

Burnley created very little until the 70th minute when they started to improve and, while Vydra’s goal was not inevitable, it was not completely against the run of play.

The visitors could have won it too. Jay Rodriguez lacked conviction in injury-time when he headed for the corner flag instead of going for goal, and Vydra hit a half-volley wide from a long Pope clearance.

“The lads worked terrifically hard,” said Clarets boss Sean Dyche. “They were all over us in the first half. We hung in there really.

“We felt the game might calm slightly and we found better moments in the second half.

“When you come to these clubs and they’re flying like they are, you might need your keeper to play well. Nick Pope was fantastic.”

Coming on the back of their first win of the Premier League season – against Brentford last weekend -Dyche will be optimistic his side can, once again, push up the table after a slow start.

“They weren’t getting a lot of rewards for decent performances,” he said. “They got the reward and they come here and the mentality was on show.”