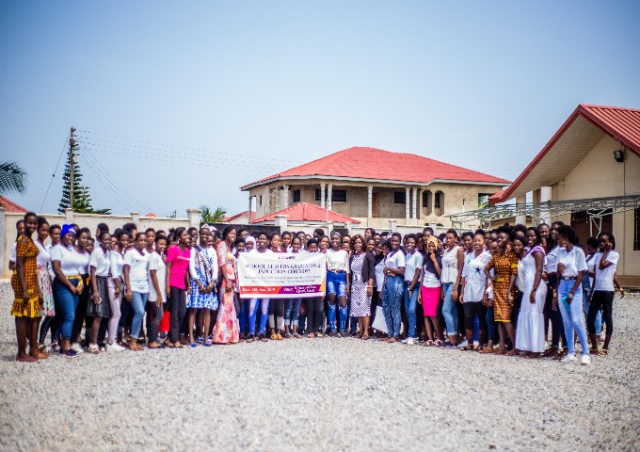 Girl-child advocacy network, Campaign for Female Education Association (CAMA GHANA) has added its voice to calls to maintain the steam surrounding the fight against teenage pregnancy in Ghana, especially in the Ekumfi locality.

Entrepreneur and member of the alumni network, Martha Fanny Gaise, who was the guest speaker during a school leavers ceremony said one sure way of eradicating the vice is girls living with a personal principle to abstain from early sex.

She challenged the new school leavers to live exemplary lives to prove that anti-teenage advocacy is possible in the district and elsewhere where teenage pregnancy is high.

This was at a ceremony held at the St. Francis of Assisi Church in Elmina in the Central region for over 75 girls who are beneficiaries of the scheme’s scholarship.

Speaking on the theme “Time to celebrate; time to look into the future”, the graduates took turns to highlight the need for a more concerted effort to curb the menace.

Report shows that phenomenon is very high in Ekumfi which has caught the attention of stakeholders who are alarmed.

Chairperson for the convocation and CAMFED mentor, Madam Juan Tegbe stressed on the need for activities of the group in the area to be tailored towards improving the sexual reproductive health of girls there.

She added that the peer network of the group should step up initiatives to making the community a safe haven for the aspirations of females.

Over the years, it has supported over 72,000 students through secondary education; over 300,000 children through its community-focused projects and about 122,000 pupils with learning materials at the primary level.

This year’s ceremony created a platform for alumni, its mentors and patrons, activists and members, to jointly congratulate the new graduates as well as to share ideas on solutions to the many challenges facing the girl-child and her education in the country.

Past beneficiaries of the scholarship who are now in higher institutions of learning shared their experiences and insight with them and urged them to live exemplary lives and represent the ideals of CAMFED as they go out into the world.

They were then inducted into the CAMFED Alumni Network (CAMA) and pledged to live a chaste life and uphold the principles of the network.

They also pledged to complement efforts by governments, civil societies and global bodies on the girl-child campaign in the little way they can at the local levels.

These new graduates will continue to receive grooming, training, scholarships and support in aspects they are passionate about.

In return, they are expected to reinvest the successes gained from these support system, back into their various communities to empower more ladies and young women.