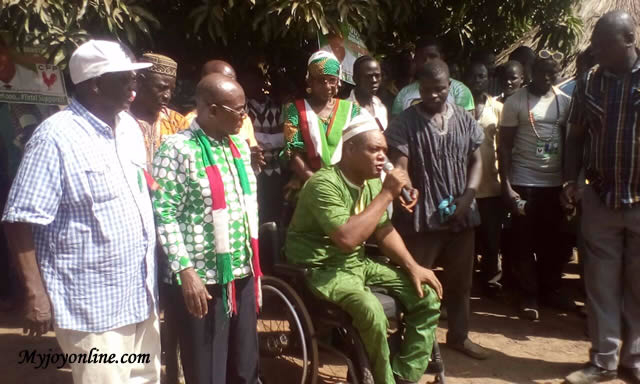 Presidential Candidate of the Convention People Party (CPP) has promised to make healthcare and education free of any charges for persons with disabilities if the party is given the mandate on December 7.

In addition, Ivor Kobina Greenstreet said transportation will also be free for the disabled when he addressed some party faithful in the Northern Region on Thursday.

He said a law will be passed to ensure that at least 5 percent of employees both in public and private companies are persons with disabilities.

To make this possible, Mr Greenstreet promised that a CPP government will invest in enrolling them in skills training programmes.

The candidate of the National Democratic Congress (NDC), President John Dramani Mahama is expected to be in the Upper West region, to commission a renovated airstrip.

Dozens of party supporters are gathered at the Wa Airstrip as at midday awaiting his arrival, according to Joy News' Rafiq Salam.

"The President is expected to meet chiefs, opinion leaders, and leaders of the NDC as well as hold rallies in some communities, " the reporter said.

Down, South, the New Patriotic Party's (NPP) Nana Addo Dankwa Akufo-Addo was in Osino in the Fanteakwa South Constituency.

He promised to regularize illegal mining activities in the area to ensure due processes are followed to protect the environment, Maxwell Kudekor has reported.