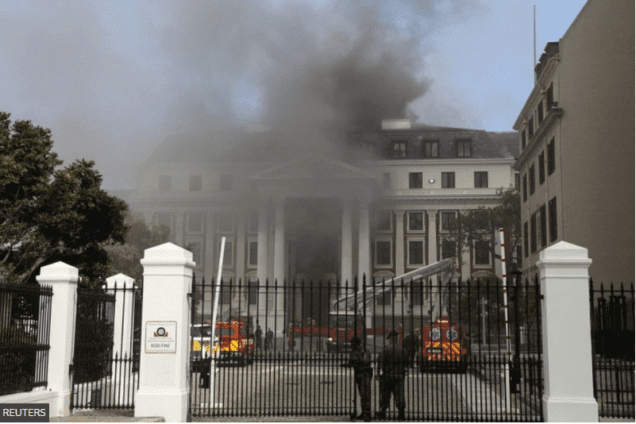 Dozens of firefighters are at the scene

A large fire is raging at the Houses of Parliament in the South African city of Cape Town.

Video footage shows a plume of black smoke filling the sky, with huge flames coming out from the roof of the building.

Dozens of firefighters are at the site battling the blaze; it is not yet clear what caused the fire.

The roof area had caught fire and the National Assembly building was on fire too, the city authorities initially said.

Minister of Public Works Patricia de Lille later said the fire in the Chamber of the Council of Provinces (the parliament’s upper house) had been contained, but the National Assembly building was still burning:

[WATCH] “Currently, the fire is in the National Assembly chambers”- Minister of Public Works and Infrastructure Patricia de Lille tells the media.

Tune into #Newzroom405 for more developments on this story.

The parliament is not currently in session because of the holidays.

The Houses of Parliament in Cape Town are made up of three sections, with the oldest dating back to 1884. The newer sections built in the 1920s and 1980s house the National Assembly.

Last year, a fire ravaged part of the University of Cape Town’s library, which was home to a unique collection of African archives.