Cause of helicopter crash would be unravelled- Attivor 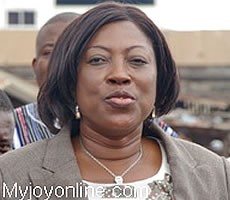 Transport minister, Dzifa Attivor, has given a strong assurance that government will investigate and present detailed report on the fatal helicopter crash at the West Cape Three Points in the Western Region.

Three people died, when the chopper on which they were travelling reportedly went up in flames and plunged into the sea.

Three others were rescued with one person still missing days after the accident.

A-five-member committee chaired by retired Air Force officer, Victor Owusu, has begun investigations into the cause of the accident.

Madam Attivor, who visited one of the survivors of the crash at the 37 Military Hospital, Tuesday afternoon, said government will not relent until it unravels the cause of the accident.

"We sympathize with the families. They have lost their loved ones. Our condolences go to them", she mourned.

The Transport minister said after the investigations, the real cost of accident will be made known to the public.

He assured  that his outfit is doing its best to ensure air safety in the country.

"I can accept that when an issue like this happens, a lot of people would be worried and want to question safety issues.

"I want to assure our country men that we remain very safe," he stated.

He said the true cause of the accident would be investigated and made public.