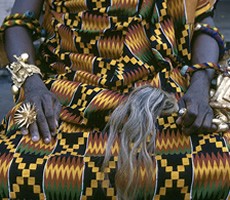 Residents of Kwahu-Pepease in the Eastern Region were last Friday thrown into a state of shock when the ghost of the late chief of the town, Nana Okyere Ampadu II, allegedly spoke through his sixth wife, Mama Akua Kunamah, and purportedly warned the ex-queen mother, Nana Oforiwa Pokuah and others, to desist from tarnishing his image.

Reports said Friday evening a stranger was spotted running towards the Kwahu-Pepease Nkosoguasuafohene's palace. The residents quickly followed the stranger – a woman – to the palace.

The paper gathered that as soon as the lady entered the palace, she started shouting and seriously shivering. She was said to be speaking like the late chief, Nana Okyere Ampaqdu II, indi­cating that since his death, there hadn't been peace in the area. Nana was pur­portedly worried that his funeral rites had not been performed the right way and for that reason, he could not stay in his grave.

According to the allegedly pos­sessed lady, the late chief noted that the queen mother and some family members had created confusion in the area by taking away the stool, regalia and jewelleries – which are used by the traditional rulers.

The 'ghost' further warned that if the queen mother and her followers do not return the royal stool and stop fomenting the tribal war in the area, he (the late chief) would kill them one after the other because he had been disgraced.

The possessed lady sent for Nana's sixth wife, Mama Akua Kunamah. When she was brought before her, she (lady) reportedly touched Mama Kunamah and the spirit was said to have been transferred into her (chief's wife), who also gave warnings and mentioned names of those who were fighting against the new chief.

However, the Nkosoguasuafohene who was visibly shocked took the woman to the Adehyehene’s palace, followed by a large number of the inhabitants, to inform him about the strange incident.

After pouring of libation, the lady asked the traditional rulers to go to the late chief's grave at the main palace to perform other rituals before the spirit deserted her.

Nana Appiah Ofori II, the Kwahu- Pepease Adehyehene, in an interview with DAILY GUIDE confirmed the incident and said the ex-queen mother and the late Abusuapayin some time ago allegedly broke into the palace, stole the black royal stool and con­veyed it to an unknown place.

According to him, she was sum­moned to appear before the Okwawu Traditional Council at Abene but she refused to turn up. For that matter, the kingmakers destooled her.

He noted that the new chief, Nana Kwaku Bonsu, is a royal who qualifies to be enstooled, but the destooled queen mother went ahead to pick an unknown person and installed as chief.

In an interview, Nana Pokuah admitted that the stool was in her custody, and would never release it to the kingmak­ers because they (kingmakers) had taken a wrong decision by installing a chief who is not a royal.

She said the ghost of the late chief could not do anything to her.