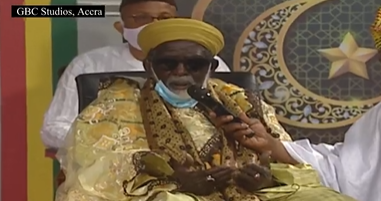 The Ministry of Chieftaincy and Religious Affairs, has acknowledged the generous cash donation by the National Chief Imam, Sheikh Osmanu Nunu Sharubutu towards the construction of the National Cathedral.

A statement issued by the Ministry of Chieftaincy and Religious Affairs, copied to the Ghana News Agency, said the Ministry welcomed the singular gesture by the National Chief Imam in support of mobilization of funds for a national edifice and believed that it would deepen the unique goodwill between Muslims and Christians in the country.

“The inter-faith harmony that exists among the various religious groups in the country is an enviable one that calls for all efforts to protect it for posterity,” it said.

“Sheikh Sharubutu’s gesture remains an open testament that will not be forgotten in the history of religious tolerance in the country.”

The statement encouraged individuals, groups and institutions to also support the initiative.

It affirmed the Ministry’s commitment to ensuring peaceful co-existence among divergent religious groups in the country to ensure peace for the development of the country.